Parma will be taking on visiting side Napoli at Stadio Ennio Tardini in this Serie A clash on Sunday.

Our predictions, user poll and statistics for Parma v Napoli can be found here - as well as the best betting odds.

Parma, following on from their previous result, will be hoping for more of the same after the 3-4 Serie A triumph vs Lecce.

I Crociati have been conceding pretty frequently of late, although they have also found ways to hit the back of the net themselves. Looking at their last 6 games, I Crociati have seen their goal breached in 6 of them in addition to managing to get on the scoresheet in 6 of those matches. That pattern won’t necessarily follow through into this match, though.

Following on from a losing effort in their last game against Barcelona in Champions League competition, Napoli will be hoping to turn things around here.

The numbers tell their own story, and Napoli have been scored against in 5 of their last 6 games, seeing their opponents hit 9 goals in total. At the back, Partenopei seem to have a bit of a soft underbelly.

Looking at their most recent head to head meetings going back to 18/12/2014 shows that Parma have won 2 of them and Napoli 3, with the tally of draws standing at 1.

A combined total of 19 goals were yielded between them in these games, with 6 of them from I Crociati and 13 coming from Partenopei. That is an average goals per game value of 3.17.

That time, Parma managed 31% possession and 8 attempts at goal with 2 on target. The goals were scored by Gianluca Caprari (45') and Dejan Kulusevski (87').

For their opponents, SSC Napoli got 19 shots at goal with 4 of them on target. Lorenzo Insigne (54') scored.

Parma boss Fabio Liverani has a full complement, with no fitness concerns at all coming into this clash thanks to a completely healthy squad to choose from.

Owing to a completely healthy squad available to choose from, Napoli boss Gennaro Gattuso has zero fitness worries at all ahead of this match.

We’re thinking that Parma have it within them to breach the defence of this Napoli team, although one goal possibly won’t be enough to avoid defeat.

Our tip is for a narrow 1-2 winning score for Napoli when the full-time whistle blows. It will be interesting to see how this one goes.

Both Teams to Score Prediction for Parma vs Napoli
Yes 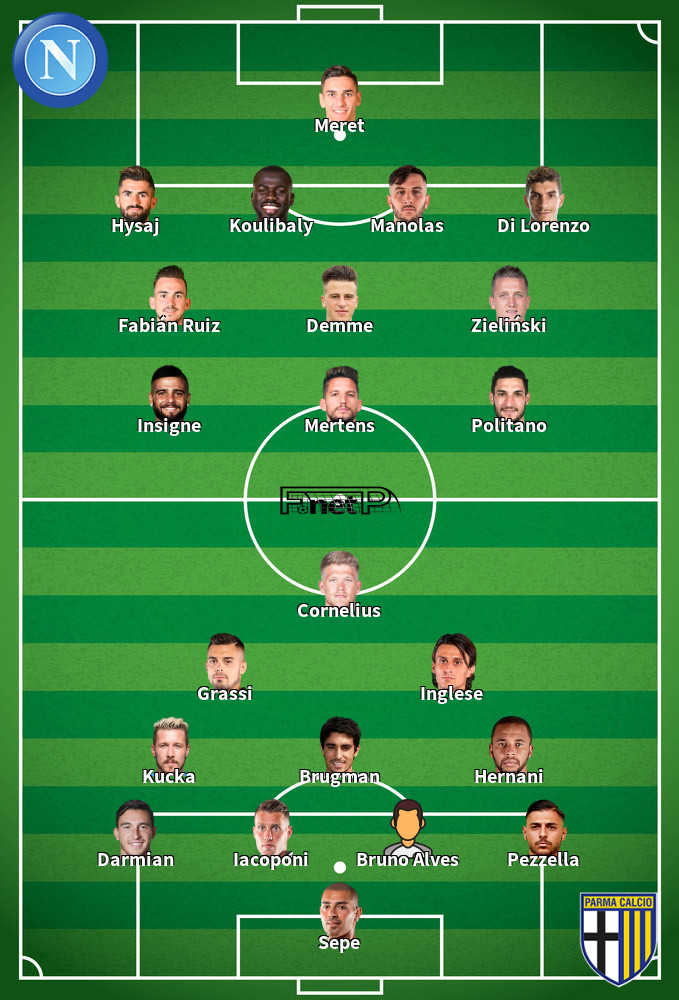 We have made these Parma v Napoli predictions for this match preview with the best intentions, but no profits are guaranteed. Please always gamble responsibly, only with money that you can afford to lose. Good luck!