Pau FC will take to the pitch with guests Valenciennes FC at Nouste Camp in the Ligue 2 match on Saturday.

For all of our match predictions, pre-game poll and statistics for Pau FC v Valenciennes FC, scroll down - along with the latest match odds.

Pau FC, following on from their previous result, will be hoping for more of the same after the 1-2 Ligue 2 victory over SM Caen.

An interesting aspect of recent Pau FC games is seeing a zero in the scoreline.

From their previous 6 matches before this one, in 5 of them a wager on BTTS would have been a loser.

Coming into this meeting, Pau FC haven't been defeated in their previous 2 league matches at home.

After being defeated in their last game at the hands of Quevilly-Rouen in Ligue 2 competition, Valenciennes FC and their fans will hope to get a better result this time.

The only name on the scoresheet from Valenciennes FC was Baptiste Guillaume (18'). Yann Boé-Kane (57') and Garland Gbellé (83') scored for Quevilly-Rouen.

It has become apparent that Valenciennes FC have failed to get amongst the goals over their last six encounters, contributing the poor return of only 4. In those fixtures, Les Athéniens have also seen the overall goal tally of their opponents equal 11. Let’s find out whether or not that trend can be continued on in this game.

At the other end, Valenciennes FC had 16 attempts on goal with 7 of them on target. Éric Vandenabeele (56'), Laurent Dos Santos (62') and Yassine Haouari (84') scored.

The Pau FC boss Didier Tholot will be grateful not to have any fitness concerns at all ahead of this match thanks to a fully healthy squad available for selection.

Out of a mainly available group, there’s just the sole fitness problem for the Valenciennes FC manager Olivier Guégan to be concerned about. Lucas Chevalier (Meniscal Injury) misses out for this game.

We feel that over the course of the game, Valenciennes FC may well find it hard to score against this Pau FC outfit who should be able to get on the scoresheet themselves in a winning performance.

We’re therefore anticipating a very competitive game with a 1-0 win for Pau FC at the end of the 90 minutes. 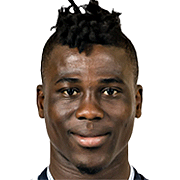 Mostly playing in the Striker position, Ebenezer Assifuah was born in Accra, Ghana. After having made a senior debut playing for FC Sion in the 2013 - 2014 season, the dangerous Forward has struck 3 league goals in the Ligue 2 2021 - 2022 season to date from a total of 7 appearances.

While we have made these predictions for Pau FC v Valenciennes FC for this match preview with the best of intentions, no profits are guaranteed. Always gamble responsibly, and with what you can afford to lose. Good luck if you do place a bet today.