Port Vale will face off against visiting team Walsall at Vale Park in this League Two tie on Tuesday.

View all of the Port Vale v Walsall predictions, poll and stats below (plus the best game odds).

Port Vale will be wanting a better result here following the 3-2 League Two losing effort in their last game against Oldham Athletic.

Fixtures involving Port Vale have tended to be entertaining ones of late with plenty of scoring being the norm. Over their past six games alone, a grand total of 22 goals have gone in for both teams combined (at an average of 3.67 goals per game) with 16 of these being chalked up by Port Vale.

Analysis of their past results shows that Port Vale:

In their previous game, Walsall drew 0-0 in the League Two tie with Rochdale.

Matthew Taylor's Walsall have fired home 7 times in the course of their most recent six matches. The overall goals that have been scored against them during the equivalent period comes to 8.

Their previous form shows that Walsall:

Inspecting their past head to head meetings stretching back to 25/04/2017 shows that Port Vale have won 2 of these & Walsall 3, with the tally of drawn games being 1.

A total of 20 goals were produced between them in this period, with 9 from The Valiants and 11 for The Saddlers. The average goals per game has been 3.33.

The last league match between these sides was League Two match day 25 on 23/01/2021 which ended up with the score at Port Vale 1-3 Walsall.

The Port Vale boss Darrell Clarke has a full complement, with no fitness worries at all ahead of this match thanks to a completely injury-free squad available for selection.

With a completely injury-free group available for selection, the Walsall manager Matthew Taylor doesn’t have any fitness concerns at all before this clash.

We’re of the view that Walsall will manage to put one past this Port Vale side, although that might not be enough to avoid defeat.

We’re expecting a very close game with a 2-1 advantage for Port Vale after the 90. Could easily see this go either way. 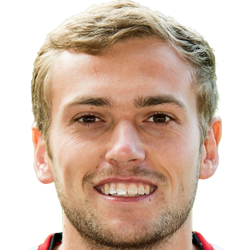 Regularly played in the Striker position, James Wilson was born in Biddulph, England. Having made his senior debut playing for Manchester United in the 2013 - 2014 season, the skilful Forward has struck 4 league goals in this League Two 2021 - 2022 season to date coming from a total of 16 appearances.

While we have made these predictions for Port Vale v Walsall for this match preview with the best of intentions, no profits are guaranteed. Always gamble responsibly, and with what you can afford to lose. Good luck with your selections.