Return to this page a few days before the scheduled game when this expired prediction will be updated with our full preview and tips for the next match between these teams.
Full-Time Result Prediction
👉
Portadown to Win

The Premiership fixture at Shamrock Park on Saturday will see hosts Portadown playing against Warrenpoint Town.

Our Portadown v Warrenpoint Town tips, poll and stats can be seen in full below (inc. the best betting odds).

Portadown, who won their previous game, will hope for a similar result following the 1-3 Premiership success vs Warrenpoint Town.

Portadown have been on a persistent run of goalscoring form, finding the back of the net every time they’ve gone out to play in their last 6 matches.

They have claimed a sum of 10 during that time while seeing the number of goals scored against them stand at 6. That sort of trend isn’t assured to follow through into this next game, though.

Showing their partiality to high-scoring matches, goals have been scored 20 times in the last six games in which Warrenpoint Town have played, yielding a mean average of 3.33 goals per clash. Opposition teams have hit 15 from this total.

A look at their prior head to head meetings going back to 19/01/2016 tells us that Portadown have won 1 of these and Warrenpoint Town 4, with the tally of draws being 1.

A combined total of 16 goals were scored between them in this period, with 5 of them from The Ports and 11 for The Point. The average number of goals per game works out to 2.67.

The last league fixture featuring these clubs was Premiership match day 33 on 24/04/2021 which finished with the scoreline of Warrenpoint Town 1-3 Portadown.

The referee was Keith Kennedy.

Portadown manager Matthew Tipton has no fitness worries whatsoever ahead of this clash owing to a fully injury-free group to choose from.

Due to a completely injury-free squad to choose from, Warrenpoint Town manager Barry Gray has no fitness worries to report before this game.

We believe that Warrenpoint Town are dangerous enough to breach the defence of this Portadown team, although it might not be enough to avoid a loss.

We’re expecting a narrow 2-1 win for Portadown at full-time. We are expecting it to be pretty even. 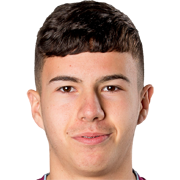 Typically deployed in the Central Attacking Midfielder position, Ben Guy was born in England. Having played his first senior match for Portadown in the 2020 - 2021 season, the goalscoring Midfielder has managed 3 league goals in this Premiership 2020 - 2021 campaign to date from a total of 18 appearances.

While we have made these predictions for Portadown v Warrenpoint Town for this match preview with the best of intentions, no profits are guaranteed. Always gamble responsibly, and with what you can afford to lose. Good luck!