Zagłębie Lubin will be taking on visiting opponents Raków Częstochowa at Stadion Zagłębia Lubin in this Ekstraklasa game on Saturday.

Zagłębie Lubin will play in this game following on from a 0-0 Ekstraklasa tied result against Raków Częstochowa.

Zagłębie Lubin have been conceding pretty frequently of late, but they have also found ways to convert their own chances into goals. Analysis of their previous 6 games shows that Zagłębie Lubin have conceded in 6 of them as well as scoring in 5 of those games. Having said that, we must now wait to see if that trend will persist in this upcoming match.

Coming into this clash, Raków Częstochowa are unbeaten in their last 6 away league matches.

Inspecting their most recent head-to-head clashes stretching back to 10/11/2019 tells us that Zagłębie Lubin have won 1 of them & Raków Częstochowa 4, with the tally of draws being 1.

In all, 20 goals were scored between the two sides throughout the course of those matches, with 7 of them from Miedziowi and 13 belonging to Raków. That’s an average goals per game figure of 3.33.

The previous league fixture between these sides was Ekstraklasa match day 16 on 27/11/2021 when the final score was Raków Częstochowa 4-0 Zagłębie Lubin.

For their opponents, Zagłębie Lubin had 7 shots on goal with 0 on target.

The referee was Sebastian Krasny.

The Zagłębie Lubin boss Piotr Stokowiec has a full complement, with no fitness concerns at all ahead of this clash with a completely healthy group available to choose from.

Thanks to a completely healthy group ready to go, the Raków Częstochowa manager Marek Papszun has no fitness worries to report ahead of this game.

Here is a game where Zagłębie Lubin will have to work hard as a team to find the net against this Raków Częstochowa team who we think will get a goal themselves and run out victorious. 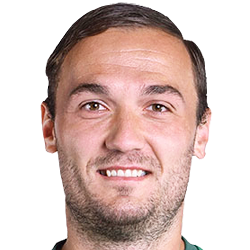 Customarily used in the Striker position, Martin Doležal was born in Czech Republic. After having made a senior debut playing for Sigma Olomouc in the 2008 - 2009 season, the accomplished Forward has struck 4 league goals in the Ekstraklasa 2021 - 2022 campaign to date coming from a total of 13 appearances.

While we have made these predictions for Zagłębie Lubin v Raków Częstochowa for this match preview with the best of intentions, no profits are guaranteed. Always gamble responsibly, and with what you can afford to lose. Good luck!