Hoffenheim will face off against visiting opponents RB Leipzig at PreZero Arena in the Bundesliga 1 game on Saturday.

View all of the Hoffenheim v RB Leipzig predictions, poll and stats below - as well as up-to-date odds.

Hoffenheim will be hoping to bounce back here after a 2-0 Bundesliga 1 loss in their previous game against VfL Bochum.

Fixtures involving Hoffenheim have often been entertaining affairs lately with plenty of scoring anticipated. Over their past six games, the sum of 23 goals have gone in for both teams combined (at an average of 3.83 goals per game) with 13 of these being chalked up by Hoffenheim. Previous results aside, it remains to be seen whether that trend might persist in this upcoming game.

RB Leipzig come into this clash after a 2-1 Bundesliga 1 win against Borussia Dortmund in their previous game.

The numbers tell their own story, and RB Leipzig have been scored against in 5 of their last 6 matches, letting opponents get 8 goals overall. In defence, RB Leipzig seem to have a bit of a soft underbelly.

A study of their past head to head results stretching back to 31/10/2018 tells us that these fixtures have been pretty painful for Hoffenheim. They have not managed to register any wins whatsoever whereas RB Leipzig have been dominant against them, beating them in 67% of those games where they have faced each other.

An aggregate of 11 goals were scored between them in these games, with 2 for Hoffenheim and 9 coming from Leipzig. That’s an average goals per game figure of 1.83.

The previous league encounter featuring these clubs was Bundesliga 1 match day 29 on 16/04/2021 when it finished RB Leipzig 0-0 Hoffenheim.

In that game, RB Leipzig managed 63% possession and 16 attempts on goal with 2 on target.

Hoffenheim got 5 shots on goal with 0 of them on target.

The Hoffenheim manager Sebastian Hoeneß has zero fitness concerns to speak of ahead of this match thanks to a completely healthy squad available to select from.

Due to a fully healthy squad ready to go, the RB Leipzig manager Jesse Marsch has zero fitness concerns at all before this clash.

In this match, Hoffenheim have enough to breach the defence of this RB Leipzig outfit, although just one goal probably won’t be good enough.

We are therefore anticipating a tight encounter finishing with a 1-2 win for RB Leipzig when the referee blows the final whistle. It really should be an interesting one. 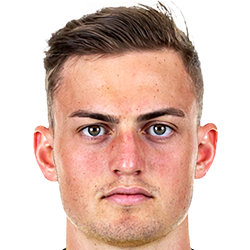 Customarily taking up the Left Wing position, Jacob Bruun Larsen was born in Lyngby, Denmark. Having made a first senior appearance for Borussia Dortmund in the 2017 - 2018 season, the accomplished Forward has managed to score 3 league goals in the Bundesliga 2021 - 2022 campaign to date from a total of 10 appearances.

We have made these Hoffenheim v RB Leipzig predictions for this match preview with the best intentions, but no profits are guaranteed. Please always gamble responsibly, only with money that you can afford to lose.