Our tips, poll and stats for Brest v RC Lens can all be found here - as well as up-to-date odds.

Brest, who won their previous game, will hope for a similar result following a 1-2 Ligue 1 success over FC Lorient.

Brest have been conceding pretty frequently recently, but they have also done enough to convert their own chances into goals. Analysis of their previous 6 games shows that Brest have been punished defensively in 5 of them while also scoring in 6 of those games.

RC Lens will go into the game following a 4-0 Ligue 1 win with the downing of ESTAC in their last outing.

Demonstrating their fondness for fruitful matches, the back of the net has been hit 20 times in the previous 6 matches in which RC Lens have played, giving a mean average of 3.33 goals for each clash. Their opponents have got 6 of those goals. That kind of trend won’t necessarily follow through into this game, however.

Checking out their prior head to head duels dating back to 19/08/2017, it’s been all-even between these two clubs with Brest winning 2 of those games, RC Lens 2 and 2 being draws in regulation time.

18 goals were shared by the two clubs in this period, with 10 of them from Les Ty' Zefs and 8 coming from Les Artésiens. That’s an average goals per game figure of 3.

On that day, Brest had 44% possession and 7 shots at goal with 5 on target.

The Brest boss Michel Der Zakarian has a full complement, with no fitness worries whatsoever before this match with a fully injury-free group ready to go.

With a fully injury-free group to choose from, the RC Lens manager Franck Haise doesn’t have any fitness worries to speak of coming into this game.

We’ve got the feeling that Brest will really need to work well to break down this RC Lens team who we think might get the vital goal that wins it.

With that in mind, we reckon that it will be a good battle with a 0-1 win for RC Lens at the end of this game. 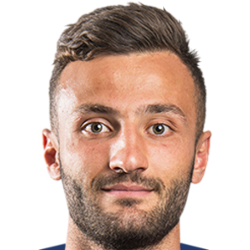 Customarily playing in the Right Wing position, Franck Honorat was born in France. Having made his senior debut playing for Nice in the 2013 - 2014 season, the gifted Forward has hit 4 league goals in the Ligue 1 2021 - 2022 season to date from a total of 13 appearances.

While we have made these predictions for Brest v RC Lens for this match preview with the best of intentions, no profits are guaranteed. Always gamble responsibly, and with what you can afford to lose. Good luck!