UD Las Palmas will be taking on visiting club Mallorca at Estadio de Gran Canaria in the La Liga 2 match on Sunday.

Our UD Las Palmas v Mallorca predictions, statistics and match poll can be seen below - as well as up-to-date odds.

UD Las Palmas will want to continue from where they left off last time out with a 6-1 La Liga 2 triumph vs CD Lugo.

Las Palmas have been finding it hard to keep clean sheets recently, but they have also done enough to convert their own chances into goals. Looking at their last 6 games, Las Palmas have conceded in 6 of them while also managing to get on the scoresheet in 5 of those matches.

Mallorca come into this game following a 1-0 La Liga 2 win versus Leganés in their previous game.

In the course of their six latest matches, Luis García's Mallorca have managed to stick the ball in the net 5 times, earning them the goals per game average of 0.83.

Going into this encounter, Mallorca have not won away from home in their last 2 matches in the league.

Looking at the statistics for their head to head meetings going back to 31/05/2014, there has been little to separate the clubs with UD Las Palmas winning 2 of those games, Mallorca 2 and 2 being drawn after 90 minutes of play.

An aggregate of 15 goals were scored between the two sides throughout the course of those matches, with 7 from Las Palmas and 8 created by Los Bermellones. This gives an average number of goals per game equal to 2.5.

The last league match featuring the two was La Liga 2 match day 21 on 10/01/2021 which finished with the scoreline of Mallorca 0-1 UD Las Palmas.

That time, Mallorca had 45% possession and 9 attempts on goal with 5 of them on target.

UD Las Palmas had 7 attempts on goal with 2 on target. Sergio Araujo (21') was the scorer.

It’s a low absenteeism rate, with just a single fitness concern for the UD Las Palmas boss Pepe Mel to contend with from an otherwise fully-primed squad. Cristian Cedrés (Cruciate Ligament Rupture) will miss out.

Thanks to a completely healthy squad to pick from, Mallorca manager Luis García has no fitness concerns at all ahead of this game.

We feel that UD Las Palmas will need things to go their way to find the net against this Mallorca team who we reckon should emerge victorious.

That’s why we have predicted a highly competitive game with a 0-1 winning score for Mallorca when the referee blows for full-time. 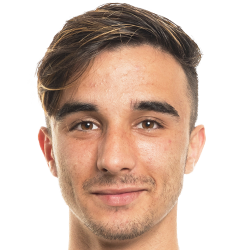 Generally taking to the field in the Striker position, Rober was born in Mérida, Spain. After having played his first senior match for UD Las Palmas in the 2020 - 2021 season, the gifted Forward has scored a sum of 5 league goals in the LaLiga2 2020 - 2021 season to date coming from a total of 23 appearances.

While we have made these predictions for UD Las Palmas v Mallorca for this match preview with the best of intentions, no profits are guaranteed. Always gamble responsibly, and with what you can afford to lose.