The wait is almost over for the Champions League action taking place on Tuesday as Real Madrid play Sheriff Tiraspol.

View all of the Real Madrid v Sheriff Tiraspol predictions, poll and stats below including the latest game odds.

Real Madrid head into this fixture after a 0-0 La Liga stalemate against Villarreal.

Their more recent scorelines shine a light on the fact that huge efforts have been put in by the Real Madrid backline. Real Madrid have kept it tight, resulting in the number of goals that have gone past their goalkeeper during their previous six matches standing at 4. That sort of pattern isn’t assured to follow through into this game, however.

Sheriff Tiraspol head into the meeting following on from a 2-0 Champions League win with the eclipse of Shakhtar Donetsk in their most recent game.

A run of reliable displays by the Sheriff Tiraspol defensive unit has resulted in the number of goals they’ve conceded amounting to 2 from their last 6 fixtures combined. During the same period, their forwards have scored 10.

Due to a completely injury-free squad available to select from, the Sheriff Tiraspol manager Yuriy Vernydub has zero fitness worries whatsoever ahead of this clash.

We’re thinking that Sheriff Tiraspol will likely be able to score against this Real Madrid lineup, although it possibly won’t be as many as the goals that they could concede.

We’re expecting a close game with a 2-1 win for Real Madrid by the conclusion of the game. It’s a very tough call. 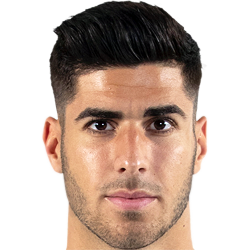 Mostly played in the Left Wing position, Marco Asensio was born in Palma de Mallorca, Spain. Having made his senior debut playing for Mallorca in the 2013 - 2014 season, the accomplished Forward has managed 3 league goals in this LaLiga 2021 - 2022 campaign so far in 5 appearances.

While we have made these predictions for Real Madrid v Sheriff Tiraspol for this match preview with the best of intentions, no profits are guaranteed. Always gamble responsibly, and with what you can afford to lose.