Our tips, poll and stats for Real Sociedad v Napoli can all be found here (including the best match odds).

Real Sociedad, following on from their previous result, will be hoping for more of the same after a 4-1 La Liga triumph versus SD Huesca.

Their more recent scorelines really do illustrate the point that huge efforts have been put in by the Real Sociedad defence. Txuri-urdin have been stingy, seeing the number of goals that have gone in at their end over the course of their past 6 games standing at 2. Such a pattern won’t necessarily be sustained into this next game, of course.

Napoli will go into this meeting after a 1-2 Serie A win versus Benevento in their previous outing.

Proving their predisposition for productive matches, we’ve had goals 20 times in the prior six matches in which SSC Napoli have taken to the pitch, yielding an average of 3.33 goals each fixture. Their opponents have hit 6 of these goals.

Our assessment is that Napoli and Real Sociedad could both end up scoring in what appears to be a good match-up, with little separating these two teams.

Will be interesting to see how this one goes, with a good chance of a draw. We’re therefore anticipating a very even match with a 1-1 scoreline at full-time. 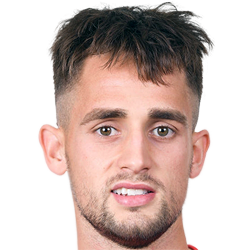 Regularly playing in the Left Wing position, Adnan Januzaj was born in Brussels, Belgium. Having played his first senior match for Manchester United in the 2013 - 2014 season, the goalscoring Forward has scored 2 league goals in this LaLiga 2020 - 2021 campaign so far in 5 appearances.

While we have made these predictions for Real Sociedad v Napoli for this match preview with the best of intentions, no profits are guaranteed. Always gamble responsibly, and with what you can afford to lose. Best of luck.