Santos Laguna come up against visitors Universidad Nacional at Estadio Corona in this Liga MX (Apertura) fixture on Thursday.

Scroll down for all of our predictions, poll and stats for the Santos Laguna v Universidad Nacional game - plus the latest betting odds.

Santos Laguna will play in this match coming off the back of a 1-1 Liga MX (Apertura) stalemate against FC Juárez.

The only name on the scoresheet from Santos Laguna was Brayan Garnica (82'). Dario Lezcano (68') scored for FC Juárez.

It has been a rare occasion in recent games where Santos Laguna haven’t conceded. The facts show that Guerreros have failed to prevent opponents from scoring in 5 of their previous 6 matches, leaking 9 goals on the way. Nonetheless, we will just have to wait and see whether that pattern might persist in this next game.

Looking at their past form shows that Santos Laguna:

Universidad Nacional will come into the meeting after a 4-1 Liga MX (Apertura) win to defeat Puebla in their most recent game.

In that game, Universidad Nacional managed 53% possession and 18 shots on goal with 11 of them on target. For Universidad Nacional, the goals were scored by Fabio Álvarez (32'), Carlos González (36'), Johan Vásquez (59') and Juan Ignacio Dinenno (63'). For their opponents, Puebla had 6 attempts at goal with 3 on target. Salvador Reyes (10') scored for Puebla.

A series of hard-working displays from the Universidad Nacional defenders has resulted in the number of goals they’ve conceded amounting to 4 from their last 6 outings in total. Over that same period of time, their forwards have scored 10.

Looking at their past head to head clashes dating back to 05/11/2017 tells us that Santos Laguna have won 1 of these and Universidad Nacional 2, with the number of drawn results being 3.

20 goals were produced between them throughout the course of those matches, with 10 of them from Guerreros and 10 netted by Pumas. That’s an average goals per game figure of 3.33.

The last league fixture featuring these sides was Liga MX (Clausura) match day 4 on 02/02/2020 which finished with the scoreline of Santos Laguna 1-1 Universidad Nacional.

On that day, Santos Laguna managed 50% possession and 13 shots on goal with 4 of them on target. The scorer was Julio César Furch (58').

Universidad Nacional got 6 shots at goal with 4 of them on target. Johan Vásquez (70') was the scorer.

Nearly everyone is up for selection, with just the sole fitness concern for the Santos Laguna manager Guillermo Almada to contend with from a near full-strength group. Brian Lozano (Tibia and Fibula Fracture) is out of contention.

Owing to a completely injury-free group available for selection, Universidad Nacional boss Andres Lillini has no fitness worries to speak of ahead of this match.

For this match, we think that Santos Laguna should really get a couple of goals in this one when they meet Universidad Nacional, who may well struggle to score themselves.

We’re therefore expecting to see a comfortable 2-0 win for Santos Laguna at the end of the 90 minutes.

Over/Under 2.5 Goals Prediction for Santos Laguna vs Universidad Nacional
Under 2.5 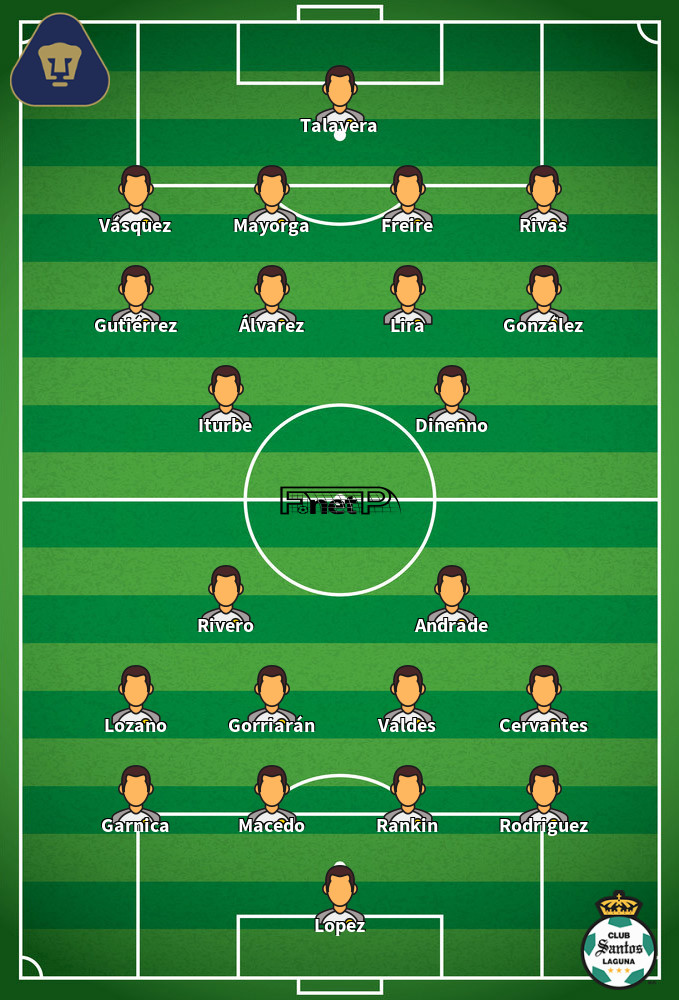 Usually taking up the Striker position, Julio César Furch was born in La Pampa, Argentina. After having made a senior debut playing for Olimpo in the 2010 - 2011 season, the gifted Forward has managed 3 league goals in the Liga MX (Clausura) 2019 - 2020 campaign so far coming from a total of 10 appearances.

While we have made these predictions for Santos Laguna v Universidad Nacional for this match preview with the best of intentions, no profits are guaranteed. Always gamble responsibly, and with what you can afford to lose. Good luck with your selections.