Return to this page a few days before the scheduled game when this expired prediction will be updated with our full preview and tips for the next match between these teams.
Full-Time Result Prediction
👉
SC Austria Lustenau to Win

The 2. Liga match at Reichshofstadion on Sunday sees home side SC Austria Lustenau fighting it out with opponents SKN St. Pölten.

All of our predictions, stats and the user poll for SC Austria Lustenau v SKN St. Pölten are shown below - as well as the best betting odds.

SC Austria Lustenau will play in this game coming off the back of a 1-1 2. Liga drawn result vs FC Blau-Weiss Linz.

The only player to score from SC Austria Lustenau was Michael Cheukoua (66'). Paul Mensah (20') was the scorer for FC Blau-Weiss Linz.

SC Austria Lustenau have been on a persistent run of goalscoring form, netting in one hundred percent of their last 6 matches.

They have managed to rack up 13 during that period while seeing the number of goals scored against them stand at 3. In any event, we’ll just have to find out if that trend shall be sustained here in this match or not.

Their past results show that SC Austria Lustenau:

SKN St. Pölten will come into the encounter after a 4-1 2. Liga win as they beat KSV 1919 in their previous match.

SKN St. Pölten have been good when going forward of late, scoring 12 times in their previous 6 matches. While their manager Stephen Helm will no doubt take that as a positive sign, SKN St. Pölten can also improve defensively after being scored against in 6 of those same matches.

Coming into this clash, SKN St. Pölten are without an away win for the past 2 league games.

A look at their prior head-to-head clashes stretching back to 22/05/2015 shows that SC Austria Lustenau have won 2 of them and SKN St. Pölten 3, with the number of drawn results standing at 1.

An aggregate of 15 goals were yielded between them during those clashes, with 6 of them from Lustenau and 9 for St. Pölten. That is an average goals per game value of 2.5.

In that match, SKN St. Pölten had 50% possession and 8 shots on goal with 3 of them on target. Their only player on the scoresheet was Krešimir Kovačević (55').

SC Austria Lustenau had 10 shots at goal with 4 on target. Haris Tabaković (90') scored.

It looks to us that SC Austria Lustenau look likely to fashion enough chances to find the net more than once while possibly not conceding when they line up against SKN St. Pölten, who may well find it hard finding the net themselves.

We’re therefore anticipating a comfortable 2-0 winning margin for SC Austria Lustenau at the end of the match. 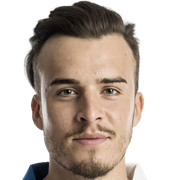 Regularly played in the Striker position, Haris Tabaković was born in Switzerland. After having made a senior debut playing for BSC Young Boys in the 2012 - 2013 season, the talented Forward has managed to score 24 league goals in this 2. Liga 2021 - 2022 campaign to date coming from a total of 20 appearances.

We have made these SC Austria Lustenau v SKN St. Pölten predictions for this match preview with the best intentions, but no profits are guaranteed. Please always gamble responsibly, only with money that you can afford to lose. Good luck if you do place a bet today.