Paderborn will be hosting visiting opponents Osnabruck at Benteler-Arena in the Bundesliga 2 match on Wednesday.

Our predictions, user poll and statistics for Paderborn v Osnabruck can be found here - plus the latest match odds.

Paderborn will play in this match following a 0-0 Bundesliga 2 draw against Eintracht Braunschweig.

In that game, SC Paderborn 07 managed 65% possession and 13 attempts at goal with 3 of them on target. Eintracht Braunschweig had 5 attempts on goal with 0 on target.

Over their past 6 games, Steffen Baumgart's SC Paderborn 07 have managed to score 10 times which gives them an average number of goals scored per match equal to 1.67.

Their past results show that SC Paderborn 07:

Since a losing effort in their last game against Fortuna Dusseldorf in Bundesliga 2 action, Osnabruck and their fans will hope to get a better result this time.

In that match, Osnabruck had 50% possession and 9 shots on goal with 3 on target. On the other side, Fortuna Düsseldorf got 17 attempts on goal with 9 of them on target. Kristoffer Peterson (37'), Dawid Kownacki (50') and Marcel Sobottka (68') scored for Fortuna Dusseldorf.

Looking at their form, and Osnabruck have been scored against in 5 of their last 6 matches, seeing their opponents hit 11 goals overall. At the back, Osnabrück just haven’t been too solid at all.

Leading up to this clash, Osnabruck:

Checking on their past head to head meetings stretching back to 29/04/2011 tells us that these fixtures have not been kind to Osnabruck. They have not managed to get themselves any wins whatsoever whereas Paderborn have remained in the ascendancy, finishing as winners in 83 per cent of those games where they have faced each other.

A sum of 14 goals were scored between them in these games, with 13 of them from Paderborn and 1 belonging to Osnabrück. That’s an average goals per game figure of 2.33.

The previous league fixture between these clubs was Bundesliga 2 match day 13 on 19/12/2020 which finished with the scoreline of Osnabruck 0-1 SC Paderborn 07.

Nicolas Bürgy (Cervical spine injury) and Uwe Hünemeier (Calf Problems) will not be taking part for Paderborn manager Steffen Baumgart. Johannes Dörfler is ineligible for this match because of suspension.

Thanks to a fully injury-free group available to select from, Osnabruck boss Markus Feldhoff doesn’t have any fitness concerns to report coming into this clash.

Looking at these two teams, we feel that Paderborn have it within them to fashion enough chances to find the net more than once while possibly not conceding when they face Osnabruck, who could well find it tough to get a goal of their own.

Our tip is for a pretty comfortable 2-0 margin for Paderborn when all’s said and done. 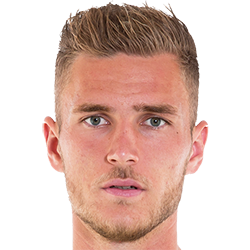 Mostly played in the Striker position, Dennis Srbeny was born in Berlin, Germany. After having made a senior debut playing for Hansa Rostock in the 2013 - 2014 season, the gifted Forward has accumulated 12 league goals in the Bundesliga 2 2020 - 2021 campaign to date in a total of 29 appearances.

We have made these Paderborn v Osnabruck predictions for this match preview with the best intentions, but no profits are guaranteed. Please always gamble responsibly, only with money that you can afford to lose. Good luck!