The Championship meeting at Vicarage Road Stadium on Monday sees home team Watford fighting it out with Sheffield United.

All of our predictions, stats and the user poll for Watford v Sheffield United are shown below - plus the latest match odds.

Watford won’t want a repeat of their last result here following the 2-1 Premier League loss in their previous game against Chelsea.

In that match, Watford had 28% possession and 8 shots on goal with 3 on target. The scorer for Watford was Dan Gosling (87'). Chelsea had 19 attempts at goal with 8 of them on target. Kai Havertz (11') and Ross Barkley (91') scored for Chelsea.

Sheffield United go into this meeting after a 1-2 Championship Play-offs win with the downing of Nottingham Forest in their most recent fixture.

Over the course of their previous 6 clashes, Sheffield United have helped themselves to the sum of 12 goals. Sheffield United have also not failed to score on each one of those occasions. In that time, their defenders have had 5 goals go into their own net. That kind of pattern won’t necessarily be carried forward into this next game, though.

An examination of their past head-to-head meetings dating back to 15/08/2009 shows that Watford have won 3 of these and Sheffield United 1, with the number of drawn matches being 2.

A combined total of 11 goals were shared by the two clubs in this period, with 8 of them for The Hornets and 3 being from The Blades. That’s an average goals per game of 1.83.

The previous league fixture featuring these sides was Premier League match day 19 on 26/12/2019 when it finished Sheffield United 1-1 Watford.

In that game, Sheffield United had 57% possession and 16 attempts on goal with 4 of them on target. Their only player on the scoresheet was Ollie Norwood (36').

At the other end, Watford got 5 shots on goal with 2 of them on target. Gerard Deulofeu (27') was the scorer.

The referee was David Coote.

The Watford boss Rob Edwards has a full complement, with no fitness concerns whatsoever before this match owing to a fully injury-free group available for selection.

We are thinking that The Hornets will possibly use the 4-3-3 formation for this one with Daniel Bachmann, Jeremy Ngakia, Christian Kabasele, Craig Cathcart, Hassane Kamara, Tom Cleverley, Edo Kayembe, Daniel Gosling, Ismaïla Sarr, João Pedro and Emmanuel Dennis.

Sheffield United boss Paul Heckingbottom has not got a full squad to pick from. Jayden Bogle (Knee Problems), Jack O'Connell (Knee Surgery) and Oliver McBurnie (Foot Injury) are those who can’t be considered.

In our view, Sheffield United have the capability to get a goal against this Watford outfit, but it probably shouldn’t be as many as they will have scored against them.

We are anticipating a narrow 2-1 victory for Watford at full-time. It really should be an interesting one. 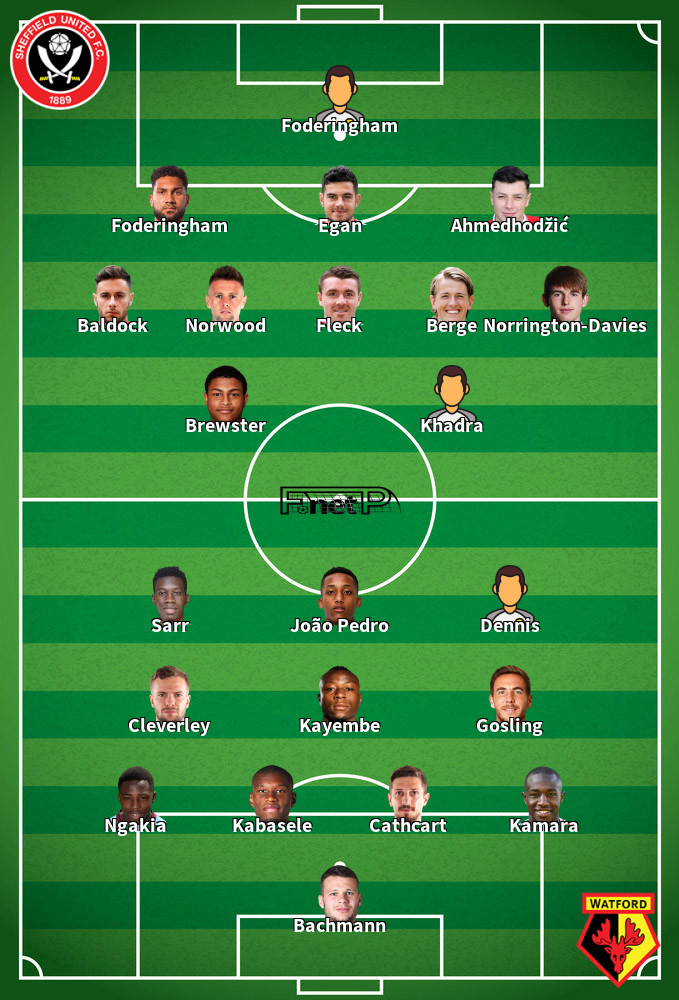 While we have made these predictions for Watford v Sheffield United for this match preview with the best of intentions, no profits are guaranteed. Always gamble responsibly, and with what you can afford to lose. Best of luck with your selections.