Return to this page a few days before the scheduled game when this expired prediction will be updated with our full preview and tips for the next match between these teams.
SKN St. Pölten will be at Pappelstadion on Saturday for the Bundesliga game with hosts SV Mattersburg. All of our predictions, stats and the user poll for SV Mattersburg v SKN St. Pölten are shown below - plus the latest match odds.

Under three goals per game were seen in 5 of the past 6 meetings where SV Mattersburg have been participants. Breaking down the goal attribution in that period, opposition teams scored a total of 8 and Mattersburg totted up 5.

A look at their previous results shows us that SV Mattersburg:

SKN St. Pölten head into the game following on from a 1-0 Bundesliga win to beat SV Mattersburg in their most recent outing. The only scorer from SKN St. Pölten was Alan Cariús (38').

A tendency of at least one team not scoring a goal in games involving SKN St. Pölten has been apparent recently. Checking on their last six games reveals that this has happened 5 times. In these clashes, opposing sides have managed a goal aggregate of 6 and St. Pölten have scored 7. We shall soon see whether or not that trend can be sustained here.

A look at their most recent head to head meetings dating back to 21/10/2018 tells us that SV Mattersburg have won 2 of these and SKN St. Pölten 3, with the number of drawn results standing at 1.

An aggregate of 8 goals were shared by the two clubs during those clashes, with 4 of them for Mattersburg and 4 for St. Pölten. That is an average goals per game value of 1.33.

The last league clash featuring these clubs was Bundesliga match day 27 on 16/06/2020 which ended up with the score at SKN St. Pölten 1-0 SV Mattersburg.

SV Mattersburg boss Franz Ponweiser has zero fitness worries whatsoever ahead of this game with a completely injury-free squad ready to go.

Owing to an otherwise full-strength group of players, there’s just the one fitness problem for the SKN St. Pölten gaffer Robert Ibertsberger to be concerned with. Kwang-ryong Pak (Elbow Injury) misses out for this game. Cory Burke cannot play in this game through suspension.

We’ve got the feeling that SKN St. Pölten should get enough chances to put one past this SV Mattersburg lineup, however it may not quite be as many as they’ll concede. We’re going for both teams to score in a 2-1 advantage for SV Mattersburg at the end of the match. There looks to be little in this one.

Both Teams to Score Prediction for SV Mattersburg vs SKN St. Pölten
Yes 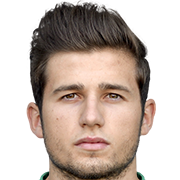 Mostly playing in the Right Attacking Midfielder position, Andreas Kuen was born in Austria. Having made a first senior appearance for FC Wacker Innsbruck in the 2012 - 2013 season, the goalscoring Midfielder has netted 4 league goals in this Bundesliga 2019 - 2020 campaign so far in 25 appearances.

While we have made these predictions for SV Mattersburg v SKN St. Pölten for this match preview with the best of intentions, no profits are guaranteed. Always gamble responsibly, and with what you can afford to lose. Good luck if you do place a bet today.