Slavia Prague will be hosting visiting club Teplice at Sinobo Stadium in this First League fixture on Sunday.

Full predictions, pre-match stats and user poll for Slavia Prague v Teplice are shown on this page (including the best match odds).

Slavia Prague enter this match after a 2-2 Conference League drawn game versus Feyenoord.

Their most recent results highlight the fact that not much more can be done by the Slavia Prague backline. Slavia Prague have kept it tight, seeing the total number of goals that have flown into the back of their net over the course of their previous six matches standing at 2. Still, we’ll just have to find out if that pattern will be maintained here in this game.

Since suffering a loss in their previous game against Pardubice in First League action, Teplice will be hoping to turn things around here.

The only player to score from Teplice was Martin Chlumecký (98'). Mojmír Chytil (39') and Lukáš Červ (79') scored for Pardubice.

In a total of 5 out of the previous 6 games featuring Teplice, a minimum of three goals have been hit. The average number of goals per game during that time is 3.5, with the number of goals averaged by Teplice equalling 1.

Going into this game, the form guide shows that Teplice:

An inspection of past results between these clubs going back to 09/02/2019 reveals that these fixtures have been miserable for Teplice. They’ve not been able to come away with any victories at all whereas Slavia Prague have just been stronger than them, finishing as winners in 83% of those games where they have faced each other.

The last league meeting featuring the two was First League match day 2 on 30/07/2021 which finished with the scoreline of Teplice 1-3 Slavia Prague.

The Slavia Prague manager Jindřich Trpišovský has a full complement, with no fitness concerns at all coming into this clash with a fully healthy group available to select from.

With a fully healthy squad available to select from, the Teplice manager Jiří Jarošík has no fitness worries whatsoever coming into this clash.

In this match, Teplice are capable enough to score a goal against this Slavia Prague lineup, although it probably won’t prevent them from conceding a couple at the other end.

We think that it’s going to be a very close game with a 2-1 victory for Slavia Prague at full-time. Should be an interesting one. 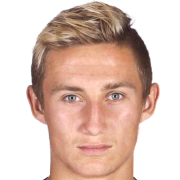 Usually playing in the Striker position, Jan Kuchta was born in Czech Republic. After making a first senior appearance for Slavia Prague in the 2015 - 2016 season, the accomplished Forward has got 7 league goals in the First League 2021 - 2022 campaign so far in 12 appearances.

While we have made these predictions for Slavia Prague v Teplice for this match preview with the best of intentions, no profits are guaranteed. Always gamble responsibly, and with what you can afford to lose. Best of luck.