Return to this page a few days before the scheduled game when this expired prediction will be updated with our full preview and tips for the next match between these teams.
Regensburg face off with visiting opponents Darmstadt at Continental Arena in the Bundesliga 2 meeting on Saturday. View all Regensburg v Darmstadt tips, stats and our pre-match poll below (plus the best game odds).

Regensburg will play in this fixture coming off the back of a 2-2 Bundesliga 2 tied result versus VfL Osnabrück. For SSV Jahn Regensburg, the goals were scored by Sebastian Stolze (8') and Max Besuschkow (37'). Marcos Álvarez (67', 70') was the scorer for VfL Osnabrück.

Three or more goals per game were seen in 5 of the last 6 fixtures where Regensburg have taken part. Opposing sides scored 10 times in this period whereas Regensburg managed a tally of 8. Having said that, it remains to be seen if the trend will persist here in this match.

Heading into this contest, SV Darmstadt 98 haven't been defeated by SSV Jahn Regensburg in games played away from home for the previous 2 league matches.

A review of their most recent head-to-head clashes dating back to 12/08/2017 shows that Regensburg have won 2 of them and Darmstadt 1, with the tally of drawn matches being 3.

A sum of 16 goals were yielded between them throughout the course of those matches, with 8 from Regensburg and 8 belonging to Darmstadt. This gives an average number of goals per game equal to 2.67.

The previous league match between these sides was Bundesliga 2 match day 13 on 10/11/2019 which finished with the scoreline of Darmstadt 2-2 Regensburg. The match was refereed by Alexander Sather.

Jan Marc Schneider (Ligament injury) and Markus Palionis (Knee injury) won’t be available for Regensburg boss Mersad Selimbegović. The players who will not be able to play in this game through being suspended are Benedikt Saller and Sebastian Nachreiner.

We’re of the view that Darmstadt and Regensburg should both be able to find the back of the net here although it’s difficult to select a clear winner. Let’s see how this one goes, but it looks this could be a draw. That is why we are leaning toward a 1-1 draw at the end of the 90 minutes.

Both Teams to Score Prediction for Regensburg vs Darmstadt
Yes 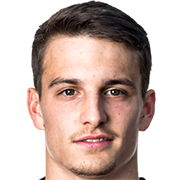 Mostly played in the Right Attacking Midfielder position, Sebastian Stolze was born in Germany. Having made his senior debut playing for Rot-Weiß Erfurt in the 2013 - 2014 season, the accomplished Midfielder has struck 7 league goals in the Bundesliga 2 2019 - 2020 campaign so far in 23 appearances.

While we have made these predictions for Regensburg v Darmstadt for this match preview with the best of intentions, no profits are guaranteed. Always gamble responsibly, and with what you can afford to lose. We wish you the best of luck.