Stranraer are going up against guests Stenhousemuir at Stair Park in the League Two game on Saturday.

Our Stranraer v Stenhousemuir tips, poll and stats can be seen in full below (inc. the best betting odds).

Stranraer won’t want a repeat of their last result here after the 2-0 League Two loss in their previous game against Dumbarton.

It’s not been often in recent times where Stranraer have managed to hold out for a full 90 minutes. The reality is that Stranraer have been scored against in 5 of their previous 6 matches, giving up 9 goals along the way. While that may be of interest, we will just have to wait and see whether the trend shall continue on in this upcoming game.

In their last game, Stenhousemuir drew 2-2 in the League Two match with East Fife.

Stenhousemuir have been a threat going forward leading up to this encounter, scoring 13 times in their previous 6 matches. While their manager Stephen Swift will no doubt take that as a positive sign, Stenhousemuir can also improve defensively after being scored against in 6 of those same clashes.

Looking at the pre-match facts, Stenhousemuir:

A review of their prior head-to-head meetings going back to 15/04/2021 shows that Stranraer have won 4 of them and Stenhousemuir 1, with the number of draws standing at 1.

A combined total of 21 goals were scored between the two sides throughout the course of those matches, with 15 of them for The Blues and 6 being from The Warriors. That’s an average goals per game figure of 3.5.

Almost everyone can be considered, as there’s just one fitness concern for the Stranraer boss Jamie Hamill to be concerned about thanks to an otherwise robust group. Paul Woods (Knock) is sidelined.

In an otherwise full-strength group of players, there is only the sole fitness problem for the Stenhousemuir boss Stephen Swift to contend with. Liam Brown (Knock) won’t be in action.

Our thinking is that Stenhousemuir and Stranraer are both capable of scoring here.

Let’s see how it plays out, but a draw is looking likely to us. With that in mind, we reckon that it will be a tight encounter with a 1-1 score draw at the end of this one. 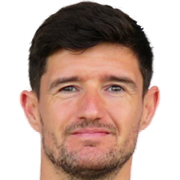 Typically used in the Right Attacking Midfielder position, Paul Woods was born in Scotland. After making a first senior appearance for Queen's Park in the 2014 - 2015 season, the gifted Midfielder has got 4 league goals in this League Two 2022 - 2023 season to date in a total of 12 appearances.

We have made these Stranraer v Stenhousemuir predictions for this match preview with the best intentions, but no profits are guaranteed. Please always gamble responsibly, only with money that you can afford to lose. Good luck!