WSG Swarovski Tirol will arrive at Merkur-Arena on Sunday for the Bundesliga clash with home side Sturm Graz.

Our tips, poll and stats for Sturm Graz v WSG Swarovski Tirol can all be found here - plus the latest betting odds.

Sturm Graz won’t want a repeat of their last result here after a 1-0 Europa League defeat in their last game at the hands of Monaco.

In that match, Sturm Graz had 28% possession and 3 shots at goal with 0 of them on target. At the other end, AS Monaco FC got 15 shots on goal with 4 on target. Krépin Diatta (66') was the scorer for Monaco.

It has been seldom in recent times where Sturm Graz have kept a clean sheet. The reality is that Sturm Graz have been scored against in 5 of their previous 6 games, giving up 6 goals during that time. It will be interesting to see whether or not that trend will be sustained here.

Following on from suffering a loss in their previous game against Red Bull Salzburg in Bundesliga competition, WSG Swarovski Tirol will be aiming to make amends here.

WSG Swarovski Tirol have attacked well of late, having scored 6 goals in their previous 6 matches. While their manager Thomas Silberberger will no doubt take that as a positive sign, WSG Swarovski Tirol can also improve defensively after being scored against in 5 of those same clashes.

Going into this encounter, WSG Swarovski Tirol have not won away from home in their last 8 league matches. It's not a good run at all.

Looking at their past head to head meetings stretching back to 25/08/2019 tells us that these fixtures have been miserable for WSG Swarovski Tirol. They’ve not managed to get themselves any victories at all whereas Sturm Graz have just been too good for them, finishing as winners in 83 per cent of those games played.

In all, 21 goals were scored between them throughout the course of those matches, with 15 of them for die Schwoazn and 6 created by WSG Tirol. That’s an average goals per game of 3.5.

The previous league fixture featuring the two was Bundesliga match day 8 on 12/05/2021 which ended up with the score at WSG Swarovski Tirol 2-3 Sturm Graz.

That day, WSG Swarovski Tirol had 64% possession and 8 attempts at goal with 3 on target. Their only player to score was Nikolai Frederiksen (39', 72').

Due to a fully injury-free squad available to choose from, the WSG Swarovski Tirol manager Thomas Silberberger doesn’t have any fitness worries whatsoever ahead of this clash.

We envisage that WSG Swarovski Tirol should get enough chances to put a goal past this Sturm Graz outfit, however it realistically won’t be as many as they’ll concede.

Our selection here is for a tight encounter finishing with a 2-1 winning margin for Sturm Graz after 90 minutes. Could easily see this go either way. 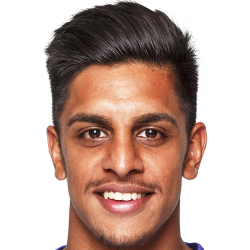 Normally taking up the Striker position, Manprit Sarkaria was born in Austria. Having made a first senior appearance for Austria Vienna in the 2017 - 2018 season, the goalscoring Forward has accumulated 4 league goals in this Bundesliga 2021 - 2022 season so far in 7 appearances.

While we have made these predictions for Sturm Graz v WSG Swarovski Tirol for this match preview with the best of intentions, no profits are guaranteed. Always gamble responsibly, and with what you can afford to lose. Good luck with your selections.