UD Las Palmas will be taking on the visiting Tenerife at Estadio de Gran Canaria in this La Liga 2 tie on Saturday.

All UD Las Palmas v Tenerife game predictions, stats and user poll are shown below - along with the latest match odds.

In that match, UD Las Palmas had 61% possession and 11 attempts at goal with 4 of them on target. The only player to score for UD Las Palmas was Jonathan Viera (90'). At the other end, UD Almería got 17 shots on goal with 5 on target. Portillo (32') scored for UD Almería.

Tenerife head into the game following on from a 2-1 La Liga 2 win with the eclipse of Amorebieta in their last outing.

In their last half-dozen outings, Tenerife have amassed a total of 10 goals. Tenerife have also not failed to score in every single one of those games. During that period, they’ve seen 7 goals go into their own net.

Going into this encounter, Tenerife have left without a victory over UD Las Palmas in away games against them for the last 6 matches in the league. Not the best of away records.

If we look at their past head to head meetings going back to 16/12/2018, it’s been all-even between these two clubs with UD Las Palmas winning 1 of those games, Tenerife 1 and 4 being draws after 90 minutes of play.

An aggregate of 8 goals were shared by the two clubs throughout the course of those matches, with 4 of them for Las Palmas and 4 for Tenerife. That’s an average goals per game figure of 1.33.

That time, Tenerife had 37% possession and 12 shots at goal with 3 of them on target. Their only player on the scoresheet was Valentin Vada (10').

The referee was Luis Milla Alvendiz.

The UD Las Palmas manager Pepe Mel will be grateful to have no fitness worries whatsoever before this clash thanks to a fully healthy squad available to choose from.

We’re thinking that Tenerife and UD Las Palmas could both end up scoring in a what should be a good tussle with little between the two teams.

Let’s see how this one goes, but it looks this could be a draw. That’s why our selection here is for a very even match with a 1-1 draw at the end of this game. 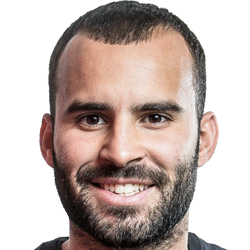 Usually deployed in the Left Wing position, Jesé Rodríguez was born in Las Palmas de Gran Canaria, Spain. Having made his senior debut playing for Real Madrid in the 2011 - 2012 season, the talented Forward has struck 3 league goals in this LaLiga2 2021 - 2022 season so far in 9 appearances.

We have made these UD Las Palmas v Tenerife predictions for this match preview with the best intentions, but no profits are guaranteed. Please always gamble responsibly, only with money that you can afford to lose. Good luck with your selections.