Return to this page a few days before the scheduled game when this expired prediction will be updated with our full preview and tips for the next match between these teams.
Full-Time Result Prediction for UD Almería vs Girona FC
UD Almería to Win

Here, we’re thinking that Girona FC may well find it hard to score goals against this UD Almería lineup who will likely just have the edge. We’re therefore anticipating a very even contest with a 1-0 win for UD Almería when all is said and done. We’ll see what happens. Our tips, poll and stats for UD Almería v Girona FC can all be found here - plus the latest match odds.

Going into this game, the form guide shows that UD Almería: 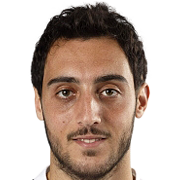 Customarily playing in the Centre Midfield position, Sergio Aguza was born in Sant Boi, Spain. After having made a senior debut playing for Real Madrid B in the 2013 - 2014 season, the accomplished Midfielder has managed 2 league goals in this LaLiga2 2019 - 2020 season to date in a total of 5 appearances.

While we have made these predictions for UD Almería v Girona FC for this match preview with the best of intentions, no profits are guaranteed. Always gamble responsibly, and with what you can afford to lose. Good luck!