Our full set of predictions, statistics and match poll for UD Las Palmas v UD Almería can be seen below (inc. the best betting odds).

UD Las Palmas fans will want a repeat of their previous result, being the 0-1 La Liga 2 success vs Tenerife.

In their past six fixtures, Pepe Mel's UD Las Palmas have scored 7 times - an average number of goals per match equal to 1.17.

Heading into this fixture, UD Las Palmas have not registered a win against UD Almería in their previous 2 league games.

After tasting defeat last time out to Elche CF in Copa del Rey competition, UD Almería will be aiming to make amends here.

Looking at their form, and UD Almería have been scored against in 5 of their last 6 games, with opponents netting 6 goals overall. Defensively, UD Almería seem to have a bit of a soft underbelly. Regardless, time will tell whether that pattern might be maintained in this upcoming match.

Looking at the statistics for their head to head duels going back to 02/06/2019, there has been little between the sides with UD Las Palmas winning 2 of those games, UD Almería 2 and 2 being draws in regulation time.

A combined total of 12 goals were produced between them during those clashes, with 5 of them for Las Palmas and 7 netted by Almería. That is an average goals per game value of 2.

That time, UD Almería managed 39% possession and 17 shots at goal with 5 on target. Their only player on the scoresheet was Portillo (32').

On the other side, UD Las Palmas had 11 attempts on goal with 4 of them on target. Jonathan Viera (90') was the scorer.

Owing to an otherwise full-strength group, there is just the sole fitness worry for the UD Almería gaffer Joan Rubi to be concerned about. Daniel Carriço (Muscle Injury) won’t be in action. Umar Sadiq is ineligible for this match because of suspension.

Our feeling is that UD Almería and UD Las Palmas could both end up scoring in a what should be a good tussle with little between the two teams.

Let’s see how this one goes, but it looks this could be a draw. That is why we are leaning toward a tight encounter, finishing with a 1-1 score at full-time. 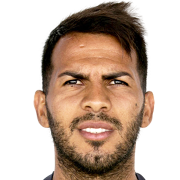 Mostly played in the Left Attacking Midfielder position, Jonathan Viera was born in Las Palmas de Gran Canaria, Spain. After having made a senior debut playing for UD Las Palmas in the 2010 - 2011 season, the talented Midfielder has scored 5 league goals in the LaLiga2 2021 - 2022 season so far coming from a total of 13 appearances.

While we have made these predictions for UD Las Palmas v UD Almería for this match preview with the best of intentions, no profits are guaranteed. Always gamble responsibly, and with what you can afford to lose. Good luck with your selections.