Return to this page a few days before the scheduled game when this expired prediction will be updated with our full preview and tips for the next match between these teams.
Full-Time Result Prediction
👉
Śląsk Wrocław to Win

Zagłębie Lubin journey to Stadion Wrocław on Saturday for the Ekstraklasa meeting with home side Śląsk Wrocław.

Scroll down for all of our predictions, poll and stats for the Śląsk Wrocław v Zagłębie Lubin game - plus the latest betting odds.

Śląsk Wrocław enter this match following on from a 0-0 Ekstraklasa stalemate vs Legia Warsaw.

A look at their previous results shows us that Śląsk Wrocław:

After tasting defeat last time out to Raków Częstochowa in Ekstraklasa action, Zagłębie Lubin will be aiming to make amends here.

Looking at their form, and Zagłębie Lubin have been scored against in 6 of their last 6 games, with opponents netting 14 goals in total. In defence, Zagłębie Lubin just haven’t been too solid at all. We shall soon see whether or not that trend will be continued on in this game.

Analysis of their past results shows that Zagłębie Lubin:

A look at their past head to head meetings going back to 01/03/2020 shows that Śląsk Wrocław have won 1 of these games & Zagłębie Lubin 2, with the tally of drawn matches being 3.

In all, 11 goals were scored between the two sides in this period, with 5 for Śląsk and 6 netted by Miedziowi. This gives an average number of goals per game equal to 1.83.

The last league fixture featuring the two was Ekstraklasa match day 1 on 15/07/2022 which finished with the scoreline of Zagłębie Lubin 0-0 Śląsk Wrocław.

That day, Zagłębie Lubin managed 51% possession and 8 attempts on goal with 3 of them on target.

At the other end, Śląsk Wrocław had 15 shots on goal with 5 on target.

The Śląsk Wrocław manager Ivan Đurđević will be grateful to have no fitness worries whatsoever ahead of this game with a completely injury-free squad to choose from.

Owing to a fully healthy squad ready to go, the Zagłębie Lubin boss Waldemar Fornalik doesn’t have any fitness worries whatsoever coming into this game.

We think that Zagłębie Lubin will have a tough ask to find the net against this Śląsk Wrocław side who will likely end up scoring and staying ahead.

We therefore see a very competitive encounter with a 1-0 winning score for Śląsk Wrocław at the conclusion of the game. 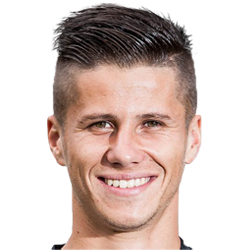 Usually used in the Centre Midfield position, Petr Schwarz was born in Czech Republic. After having made a senior debut playing for Hradec Králové in the 2011 - 2012 season, the goalscoring Midfielder has hit 2 league goals in this Ekstraklasa 2022 - 2023 season so far in 15 appearances.

We have made these Śląsk Wrocław v Zagłębie Lubin predictions for this match preview with the best intentions, but no profits are guaranteed. Please always gamble responsibly, only with money that you can afford to lose. Best of luck.