Return to this page a few days before the scheduled game when this expired prediction will be updated with our full preview and tips for the next match between these teams.
The Bundesliga 2 meeting at Voith-Arena on Sunday sees home side Heidenheim take on Erzgebirge Aue. Our predictions, user poll and statistics for Heidenheim v Erzgebirge Aue can be found here - as well as up-to-date odds.

A recurring theme in recent Heidenheim games is the high number of scores with a nil in them. From their previous sextet of clashes before this one, in as many as 5 of them a wager on BTTS would have been a losing one. We will find out whether or not that trend will be continued on into this next match.

After being beaten in their last game against SV Darmstadt 98 in Bundesliga 2 competition, Erzgebirge Aue and their travelling fans will hope for a better result here. The only scorer from Erzgebirge Aue was Florian Krüger (8'). Tobias Kempe (19') and Serdar Dursun (72', 81') scored for SV Darmstadt 98.

In the course of their 6 most recent matches, Dirk Schuster's Erzgebirge Aue have converted 9 times thus earning them the goals scored per game average of 1.5.

Coming into this fixture, Erzgebirge Aue are without a win away from home in their last 13 league matches. What a horror away run it has been.

A glance at their most recent head-to-head meetings going back to 28/01/2017 shows us that Heidenheim have won 3 of these and Erzgebirge Aue 1, with the number of drawn matches being 2.

A combined sum of 12 goals were scored between them in these games, with 7 from Heidenheim and 5 created by Veilchen. That’s an average goals per game of 2.

The last league fixture between the two was Bundesliga 2 match day 12 on 02/11/2019 when it ended Erzgebirge Aue 1-1 Heidenheim. The match was refereed by Florian Heft.

Looking at these two teams, we feel that Erzgebirge Aue will have to play well to put one past this Heidenheim outfit who should get the vital goal that wins it. That’s why we have predicted a very even contest with a 1-0 winning score for Heidenheim at the end of this one. Should be a close one.

Over/Under 2.5 Goals Prediction for Heidenheim vs Erzgebirge Aue
Under 2.5 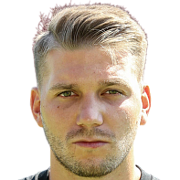 Mostly taking to the field in the Right Wing position, Robert Leipertz was born in Jülich, Germany. After making a first senior appearance for Alemannia Aachen in the 2012 - 2013 season, the accomplished Forward has contributed 6 league goals in the Bundesliga 2 2019 - 2020 season to date in a total of 25 appearances.

While we have made these predictions for Heidenheim v Erzgebirge Aue for this match preview with the best of intentions, no profits are guaranteed. Always gamble responsibly, and with what you can afford to lose. Best of luck.