Return to this page a few days before the scheduled game when this expired prediction will be updated with our full preview and tips for the next match between these teams.
Full-Time Result Prediction
👉
FC Brno to Win

Our tips, poll and stats for FC Brno v FK Příbram can all be found here - as well as up-to-date odds.

FC Brno, who won their previous game, will hope for a similar result following the 0-1 First League triumph over Baumit Jablonec.

The only name on the scoresheet from FC Brno was Jakub Přichystal (54').

Miloslav Machálek's FC Brno have seen rewards for their attempts on goal 5 times in their prior 6 outings. At the other end, the number of goals that have been scored against them in that time is 13.

Taking a look at their past results, FC Brno:

Since suffering a loss in their previous game against FC Slovácko in First League competition, FK Příbram will be aiming to make amends here.

It is worth noting that FK Příbram have struggled for goals over their last six games, contributing the poor return of only 3. In those matches, Příbram have also seen the collective goal tally against them equal 19. Despite that, we will just have to wait and see whether such a trend might persist here in this match.

Inspecting their most recent head-to-head meetings stretching back to 31/10/2015 tells us that FC Brno have won 2 of these games & FK Příbram 0, with the tally of draws standing at 4.

19 goals were yielded between them throughout the course of those matches, with 11 for Flinta and 8 belonging to Příbram. The average number of goals per game works out to 3.17.

FC Brno boss Miloslav Machálek has no fitness concerns whatsoever before this clash owing to a fully injury-free group ready to go.

Due to a completely healthy squad to pick from, FK Příbram manager Pavel Horváth has zero fitness worries at all ahead of this match.

We envisage that FC Brno can create the chances to score more than once when they come up against FK Příbram, who may well struggle finding the net themselves. 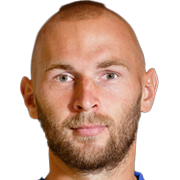 Mostly taking to the field in the Right Attacking Midfielder position, Peter Štepanovský was born in Skalica, Slovakia. After having played his first senior match for Karviná in the 2017 - 2018 season, the dangerous Midfielder has hit 2 league goals in the First League 2020 - 2021 campaign so far from a total of 6 appearances.

While we have made these predictions for FC Brno v FK Příbram for this match preview with the best of intentions, no profits are guaranteed. Always gamble responsibly, and with what you can afford to lose. Best of luck.