This Aalborg BK v Odense BK live stream video is ready for 16/09/2021. Soccer fans can watch the game on a live streaming service if this match is featured in the schedule provided above. Here we provide helpful information for watching this Superliga game including the most recent team form, head to head meetings and our match views.

In order to view the game using alternative ways, check tv schedules for your country. These broadcasting rights are often allocated on a per-competition/league or even per-fixture level. For fixtures shown live on regional tv programmes, check the listings on stations like BT Sport, Amazon Prime Video, Sky Sports, Now TV, iTV, Canal+, Fox Soccer, ESPN relevant to your location.

Post-game, we may also provide a link to match highlights from time to time. We are not responsible for transmitting any match video content linked to from here. All legal complaints must be directed to the hosters/owners of such content.

Odense BK will visit Aalborg Portland Park on Friday for the Superliga tie with home side Aalborg BK.

All Aalborg BK v Odense BK match predictions, user poll and stats are shown below (plus the best game odds).

Aalborg BK, who won their previous game, will hope for a similar result following a 2-3 Superliga triumph vs Viborg FF.

Their most recent results highlight the fact that quality has been evident in the Aalborg BK backline. Aalborg BK have been miserly, seeing the tally of goals that have gone past their goalkeeper during their last six games standing at 4.

Going into this encounter, Aalborg BK have not been beaten in their last 2 home league matches.

Odense BK go into this encounter following on from a 2-1 Superliga win with the defeat of SønderjyskE in their previous game.

In that game, Odense BK had 46% possession and 13 shots on goal with 3 of them on target. For Odense BK, the goalscorers were Jørgen Skjelvik (30') and Mads Frøkjær-Jensen (39'). On the other side, SønderjyskE got 18 attempts at goal with 7 on target. Daniel Prosser (44') scored for SønderjyskE.

Over the course of their previous six clashes, Odense BK have helped themselves to a total of 10 goals. Odense BK have additionally got on the scoresheet on each one of those occasions. In that time, their defenders have seen 10 goals scored by their opponents. Such a trend won’t necessarily follow through into this match, however.

Going into this one, Odense BK haven’t won away from home in the past 3 league games.

Checking on their most recent head-to-head meetings going back to 18/10/2019 tells us that Aalborg BK have won 2 of these & Odense BK 3, with the number of drawn results being 1.

A combined sum of 12 goals were shared by the two clubs throughout the course of those matches, with 5 of them for Aalborg and 7 created by De Stribede. The average goals per game has been 2.

The previous league contest featuring the two was Superliga match day 7 on 07/05/2021 when it ended Odense BK 1-0 Aalborg BK.

That day, Odense BK had 42% possession and 13 attempts on goal with 4 on target. Their only player to score was Bashkim Kadrii (45').

On the other side, Aalborg BK got 10 shots on goal with 2 of them on target.

Regarding absentees, there’s just the sole fitness concern for the Aalborg BK manager Martí Cifuentes to be concerned about from an otherwise fully-primed set of players. Lucas Andersen (Cruciate Ligament Rupture) misses out.

With a completely injury-free squad to choose from, the Odense BK boss Andreas Alm has no fitness worries at all ahead of this match.

Odense BK will really need to work well to be putting a goal past this Aalborg BK outfit who we reckon will end up scoring and possibly keep a clean sheet as well.

That’s why our selection here is for a hard-fought 1-0 advantage for Aalborg BK at the end of the 90 minutes. 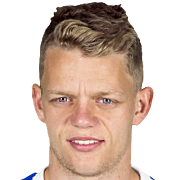 Mostly used in the Right Attacking Midfielder position, Kasper Kusk was born in Aalborg, Denmark. After having made a senior debut playing for Aalborg BK in the 2010 - 2011 season, the dangerous Midfielder has bagged 2 league goals in this Superliga 2021 - 2022 campaign to date in a total of 5 appearances.

We have made these Aalborg BK v Odense BK predictions for this match preview with the best intentions, but no profits are guaranteed. Please always gamble responsibly, only with money that you can afford to lose. Good luck with your selections.

⚽️ Where can I find the previews for other Superliga games?

View all of the next (and previous) Superliga predictions & previews here.