Sassuolo will arrive at Stadio San Siro on Sunday for the Serie A game with home team AC Milan.

View all of the AC Milan v Sassuolo predictions, poll and stats below - as well as up-to-date odds.

AC Milan will be looking to improve on their last outing here after a 4-0 Serie A loss in their previous game against Lazio.

It has been a rare occasion in recent times where AC Milan have kept a clean sheet. The reality is that AC Milan have been scored against in 6 of their previous 6 games, letting in 13 goals in the process. Regardless, we must now wait to see if that pattern might be replicated here in this game.

Leading up to this clash, AC Milan:

In the game prior to this, Sassuolo drew 1-1 in the Serie A tie with Monza.

The forward players for Sassuolo have had real problems scoring goals over their previous 6 encounters, recording the unsatisfactory return of just 4. In those fixtures, Sassuolo have also seen the collective goal tally of their opponents equal 11.

A look at their previous results shows us that Sassuolo:

An examination of their most recent head to head clashes stretching back to 21/07/2020 tells us that AC Milan have won 3 of these & Sassuolo 2, with the tally of drawn games being 1.

16 goals were scored between them during those clashes, with 9 for i Rossoneri and 7 created by Sassuolo. This gives an average number of goals per game equal to 2.67.

Sassuolo boss Alessio Dionisi has to contend with a number of unavailable players. Andrea Pinamonti (Muscular problems) and Andrea Consigli (Knee Problems) are names that won’t be on the team sheet.

We feel that AC Milan have it within them to convert a lot of goal-scoring opportunities.

At the same time, Sassuolo may well struggle to score but we can see them hitting back at some stage, too.

Accordingly, we see a pretty comfortable 3-1 margin for AC Milan at the end of this one. 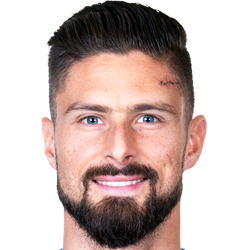 Customarily taking up the Striker position, Olivier Giroud was born in Chambery, France. After making a first senior appearance for Grenoble in the 2005 - 2006 season, the accomplished Forward has managed to score 5 league goals in this Serie A 2022 - 2023 season to date in a total of 17 appearances.

While we have made these predictions for AC Milan v Sassuolo for this match preview with the best of intentions, no profits are guaranteed. Always gamble responsibly, and with what you can afford to lose. Good luck!