Scroll down for all of our predictions, poll and stats for the Cambridge United v Accrington Stanley game - plus the latest match odds.

Cambridge United prepare for this game coming off the back of a 0-0 League One tied result vs Bolton Wanderers.

A common aspect of more recent Cambridge United games is seeing a zero in the scoreline.

From their previous sextet of matches before this one, in 5 of them a wager on BTTS would have lost. We will see if that trend will end up being sustained here.

Ahead of this meeting, Cambridge United have not won at home in their last 5 league matches. Things will have to change soon.

Following on from tasting defeat last time out to Sheffield Wednesday in League One competition, Accrington Stanley and their travelling supporters will be hoping that they can get a better result in this one.

A glance at their prior head-to-head clashes dating back to 01/10/2016 shows us that Cambridge United have won 2 of them and Accrington Stanley 3, with the number of drawn games being 1.

A total of 11 goals were scored between them during those clashes, with 5 from The U's and 6 belonging to Stanley. That’s an average goals per game of 1.83.

Almost everyone can be considered, as there’s just a single fitness concern for the Cambridge United boss Mark Bonner to be concerned with thanks to an almost full-strength group. Adam May (Cruciate Ligament Injury) won’t play.

With a completely healthy group available to choose from, the Accrington Stanley boss John Coleman has zero fitness worries at all ahead of this game.

We feel that Accrington Stanley and Cambridge United may well end up cancelling each other out here.

A draw is a real possibility, as we are expecting there to be little between them. With that in mind, we reckon that it will be a very close game with a 1-1 scoreline at the end of the 90. 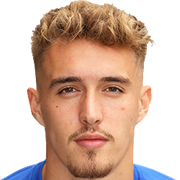 Typically playing in the Striker position, Sam Smith was born in England. Having made a first senior appearance for Reading in the 2017 - 2018 season, the accomplished Forward has accumulated 4 league goals in the League One 2022 - 2023 season to date coming from a total of 17 appearances.

While we have made these predictions for Cambridge United v Accrington Stanley for this match preview with the best of intentions, no profits are guaranteed. Always gamble responsibly, and with what you can afford to lose. We wish you the best of luck.