Our predictions, user poll and statistics for ADO Den Haag v Jong Utrecht can be found here - along with the latest match odds.

Den Haag will be looking for another win after a 2-1 Eerste Divisie triumph over MVV.

Dick Advocaat's ADO Den Haag have hit the target 7 times over their past six outings. Conversely, the number of goals that they have conceded in those games amounts to 7.

After suffering a loss in their previous game against FC Dordrecht in Eerste Divisie competition, Jong Utrecht and their travelling fans will hope for a better result here.

Aliou Baldé (4') was the scorer for FC Dordrecht.

The stats don’t lie, and Jong Utrecht have been scored against in 5 of their last 6 games, letting opponents get 7 goals in all. In defence, Jong Utrecht just haven’t been too solid at all. Still, it remains to be seen if that pattern shall continue on here in this game.

Going into this encounter, Jong Utrecht are unbeaten in their previous 2 league matches away from home.

Almost everyone can be considered, as there’s just a single fitness concern for the Den Haag gaffer Dick Advocaat to be concerned with from of an almost fully healthy group. Sacha Komljenovic (Cruciate Ligament Rupture) won’t play.

Due to a fully healthy squad available to select from, the Jong Utrecht manager Darije Kalezić has no fitness concerns to speak of before this game.

We’re thinking that Jong Utrecht should have enough to find the net against this ADO Den Haag side, however that possibly won’t quite be enough to avoid defeat.

We reckon that it will be a tight encounter finishing with a 2-1 winning margin for ADO Den Haag at the end of the match. Should be a good one. 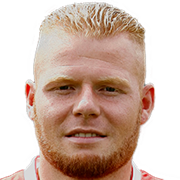 Regularly taking to the field in the Striker position, Thomas Verheydt was born in Den Haag, Netherlands. Having made his senior debut playing for MVV in the 2015 - 2016 season, the skilful Forward has accumulated 6 league goals in the Eerste Divisie 2022 - 2023 season to date coming from a total of 17 appearances.

While we have made these predictions for ADO Den Haag v Jong Utrecht for this match preview with the best of intentions, no profits are guaranteed. Always gamble responsibly, and with what you can afford to lose. Good luck with your selections.