Return to this page a few days before the scheduled game when this expired prediction will be updated with our full preview and tips for the next match between these teams.
Full-Time Result Prediction
👉
Maidstone United to Win

The National League game at Gallagher Stadium on Tuesday will see hosts Maidstone United ready themselves for the visit of Aldershot Town.

All of our predictions, stats and the user poll for Maidstone United v Aldershot Town are shown below including the latest game odds.

Maidstone United will be hoping to return to winning ways here after the 2-3 National League loss in their previous game against Wrexham.

Coming into this clash, Maidstone United are without a win at home for the past 3 league matches.

Last time out, Aldershot Town drew 2-2 in the National League tie with Bromley.

The only name on the scoresheet from Aldershot Town was Jacob Hutchinson (16'). Michael Cheek (36', 73') and Billy Bingham (70' Own goal) scored for Bromley.

In as many as 5 of the previous 6 games featuring Aldershot Town, a minimum of three goals have been struck. The average goals scored per match within that spell is 3.33, with the average number of goals for Aldershot Town being 1. It will be interesting to see whether or not that trend will be sustained into this next match.

If we look at their past head to head meetings dating back to 04/02/2017, there is nothing to separate the two clubs with Maidstone United winning 2 of those games, Aldershot Town 2 and 2 being draws in normal time.

In all, 13 goals were produced between them in these games, with 6 of them for The Stones and 7 created by The Shots. That is an average goals per game value of 2.17.

The last league game between the two was National League match day 6 on 29/08/2022 when it finished Aldershot Town 1-3 Maidstone United.

The match was refereed by Aaron Jackson.

The Maidstone United manager George Elokobi has zero fitness concerns to speak of coming into this clash with a fully healthy squad to pick from.

With a fully injury-free squad ready to go, the Aldershot Town manager Ross McNeilly has no fitness worries whatsoever coming into this match.

We’ve got the feeling that Aldershot Town will surely be able to put one past this Maidstone United lineup, however it probably shouldn’t prevent them from conceding a couple at the other end.

We’re tipping a narrow 2-1 win for Maidstone United after the 90. It will be interesting to see how this one goes. 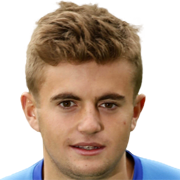 Generally used in the Centre Midfield position, Regan Booty was born in England. After having made a senior debut playing for Maidstone United in the 2022 - 2023 season, the skilful Midfielder has managed 6 league goals in the National League 2022 - 2023 campaign so far in 27 appearances.

While we have made these predictions for Maidstone United v Aldershot Town for this match preview with the best of intentions, no profits are guaranteed. Always gamble responsibly, and with what you can afford to lose. Good luck with your selections.