The Argentinos Juniors v Arsenal de Sarandí live stream video is scheduled for broadcast on 26/06/2022. Fans of both clubs can watch this match on a live streaming service if this match is featured in the schedule provided above. Here we provide you with helpful information for watching this Superliga match that includes the most recent team form, head to head meetings and our match tips.

In order to watch the game via other ways, check television schedules in your local region. Such broadcasting rights are typically allocated on a per-competition/league or even single match level. For games shown live on regional television programmes, check the listings on the likes of BT Sport, Amazon Prime Video, Sky Sports, Now TV, iTV, Canal+, Fox Soccer, ESPN depending on your current location.

When the abovementioned broadcaster indicates that they have the Argentinos Juniors v Arsenal de Sarandí soccer live streaming coverage, you’ll be able to watch it on a mobile (iPhone, Android including Motorola) and PC as well as tablet (eg iPad, Samsung Galaxy Tab).

After the match finishes, we may also link to game highlights from time to time. We are not responsible for the transmission of any game video content linked to from this site. All legal complaints must be directed to the hosters/owners of said content.

Our predictions, user poll and statistics for Argentinos Juniors v Arsenal de Sarandí can be found here including the latest game odds.

Argentinos Juniors will be hoping to bounce back here following a 1-0 Superliga defeat in their last game at the hands of Newell´s Old Boys.

Ahead of this clash, Argentinos Juniors have not been beaten in their last 5 home league matches.

In their previous fixture, Arsenal de Sarandí drew 1-1 in the Superliga match with Talleres.

Throughout their 6 most recent matches, Leonardo Madelón's Arsenal de Sarandí have had reason to celebrate scoring 9 times therefore giving them the goals per game average of 1.5.

A review of their past head to head meetings going back to 27/07/2015 tells us that Argentinos Juniors have won 4 of these games & Arsenal de Sarandí 2, with the number of drawn matches standing at 0.

A sum of 20 goals were yielded between them in these games, with 11 from Bichitos Colorados and 9 coming from Los del Viaducto. That is an average goals per game value of 3.33.

The last league clash featuring these sides was Superliga match day 3 on 29/07/2021 when it finished Arsenal de Sarandí 1-0 Argentinos Juniors.

On that day, Arsenal de Sarandí had 34% possession and 14 shots at goal with 4 of them on target. The scorer was Bruno Sepúlveda (74').

Argentinos Juniors got 7 attempts on goal with 1 of them on target.

The referee was Pablo Dóvalo.

The Argentinos Juniors boss Gabriel Milito has no fitness concerns at all before this match with a fully healthy group ready to go.

With a completely injury-free squad to pick from, the Arsenal de Sarandí boss Leonardo Madelón has zero fitness concerns whatsoever before this game.

We feel that Arsenal de Sarandí will have to work hard as a team to score against this Argentinos Juniors lineup who we think will manage to score & go ahead.

We’re therefore anticipating a 1-0 victory for Argentinos Juniors when all is said and done. 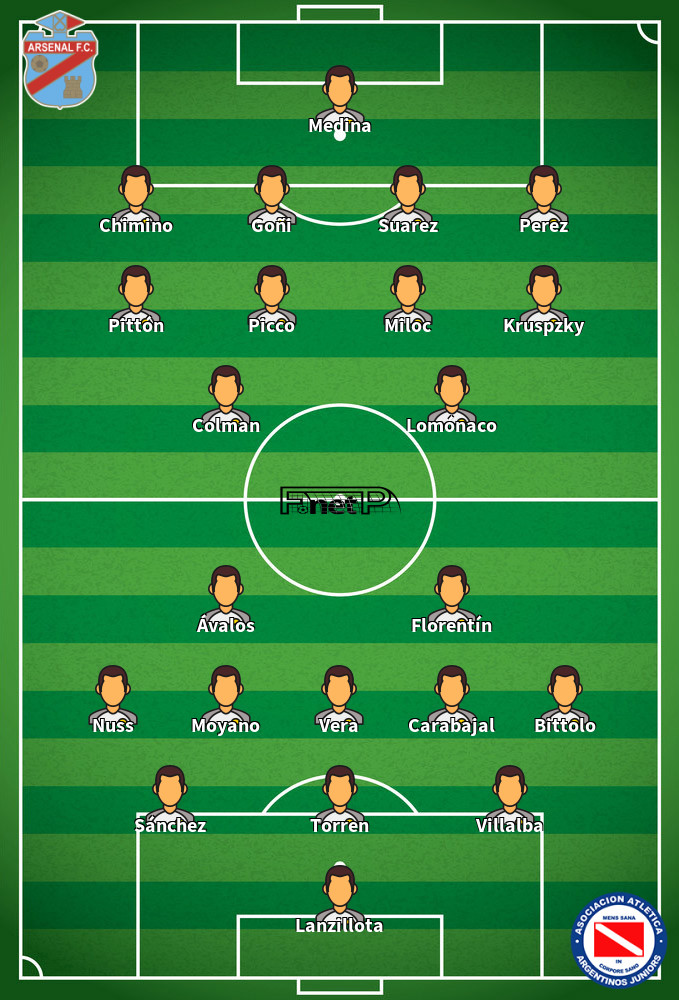 Mostly taking up the Striker position, Thiago Nuss was born in Cañuelas, Argentina. After making a first senior appearance for Argentinos Juniors in the 2022 season, the goalscoring Forward has bagged 2 league goals in this Superliga 2022 season to date in 4 appearances.

We have made these Argentinos Juniors v Arsenal de Sarandí predictions for this match preview with the best intentions, but no profits are guaranteed. Please always gamble responsibly, only with money that you can afford to lose. Good luck if you do place a bet today.

⚽️ Where can I get the predictions for other Superliga games?

You can see all of our next (and previous) Superliga predictions & previews here.