Argentinos Juniors will do battle with guests Godoy Cruz at Estadio Diego Armando Maradona in the Superliga meeting on Saturday.

To see all of our predictions, user poll & stats for Argentinos Juniors v Godoy Cruz, scroll down - as well as up-to-date odds.

Argentinos Juniors enter this fixture following on from a 1-1 Superliga drawn result versus Huracán.

Heading into this contest, Argentinos Juniors haven't lost in the league to Godoy Cruz in their previous 2 games.

Since a losing effort in their last game against Talleres in Superliga competition, Godoy Cruz will be hoping to turn things around here.

In that game, Godoy Cruz managed 54% possession and 13 shots at goal with 4 on target. Talleres had 10 attempts on goal with 3 of them on target. Rafael Pérez (60') and Juan Cruz Komar (72') scored for Talleres.

The forward players for Godoy Cruz have made hard work of scoring goals over their last 6 encounters, recording the disappointing return of just 3. In those fixtures, Tomba have also seen the overall goal tally of opposing teams equal 6. That sort of pattern might not be carried forward here, of course.

Taking a look at their past results, Godoy Cruz:

A review of their most recent head-to-head meetings stretching back to 08/02/2014 tells us that Argentinos Juniors have won 3 of these games & Godoy Cruz 1, with the number of draws standing at 2.

A combined sum of 9 goals were scored between them during those clashes, with 6 of them from Bichitos Colorados and 3 coming from Tomba. That’s an average goals per game figure of 1.5.

The Argentinos Juniors manager Gabriel Milito has no fitness concerns at all coming into this match thanks to a fully healthy group to choose from.

With a completely healthy group to choose from, the Godoy Cruz boss Diego Flores has no fitness concerns whatsoever coming into this game.

We’re inclined to think that Godoy Cruz have the firepower to get a goal against this Argentinos Juniors side, although that possibly won’t be enough to avoid a loss.

We’re expecting a tight encounter finishing with a 2-1 winning margin for Argentinos Juniors after 90 minutes. It will be interesting to see how this one goes. 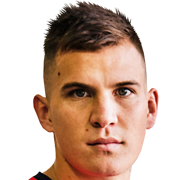 Regularly taking to the field in the Striker position, Nicolás Reniero was born in Villa del Rosario, Argentina. After having made a senior debut playing for San Lorenzo in the 2017 - 2018 season, the goalscoring Forward has contributed 5 league goals in this Superliga 2021 season so far coming from a total of 20 appearances.

While we have made these predictions for Argentinos Juniors v Godoy Cruz for this match preview with the best of intentions, no profits are guaranteed. Always gamble responsibly, and with what you can afford to lose. Good luck with your selections.