All of our predictions, stats and the user poll for Aris FC v Asteras Tripolis are shown below (including the best match odds).

Aris FC will be hoping to bounce back here after the 1-0 Super League losing effort in their last game against Olympiacos.

In that game, Aris FC had 43% possession and 8 attempts on goal with 6 on target. On the other side, Olympiacos got 3 shots at goal with 1 on target. Giorgos Masouras (38') was the scorer for Olympiacos.

Their most recent results show that much respect should be given to the Aris FC backline. Theos tou polemou have been mean at the back, with the total number of goals that have flown into the back of their net during their last six clashes standing at 4.

Going into this contest, Aris FC are unbeaten in their previous 4 league matches at home.

In their last fixture, Asteras Tripolis drew 2-2 in the Super League match with Panathinaikos.

The stats tell the story, and Asteras Tripolis have been scored against in 5 of their last 6 games, conceding 7 goals in all. In defence, The Yellow-Blue have been far from perfect. Let’s find out if that trend will be continued on here.

Analysis of their past results shows that Asteras Tripolis:

Looking at their most recent head to head meetings stretching back to 30/09/2018 tells us that Aris FC have won 4 of them and Asteras Tripolis 1, with the number of drawn games being 1.

A total of 14 goals were yielded between them during those clashes, with 10 from Theos tou polemou and 4 netted by The Yellow-Blue. That’s an average goals per game figure of 2.33.

The previous league game featuring these sides was Super League match day 20 on 30/01/2021 when the final score was Asteras Tripolis 2-1 Aris FC.

Aris FC had 6 shots on goal with 4 of them on target.

Aris FC boss Apostolos Mantzios will be grateful to have no fitness concerns to speak of coming into this match with a fully healthy squad available for selection.

Owing to a completely injury-free squad available for selection, Asteras Tripolis boss Milan Rastavac doesn’t have any fitness concerns to report before this match.

In our opinion, Aris FC will likely score more than once against Asteras Tripolis, who might well find it difficult scoring.

Therefore, we are anticipating a pretty comfortable 2-0 win for Aris FC after 90 minutes. 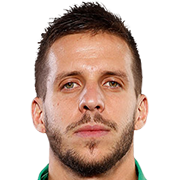 Generally taking to the field in the Central Defensive Midfielder position, Lucas Sasha was born in São Paulo, Brazil. After making a first senior appearance for Barueri in the 2010 season, the talented Midfielder has struck 3 league goals in the Super League 2020 - 2021 campaign to date from a total of 26 appearances.

We have made these Aris FC v Asteras Tripolis predictions for this match preview with the best intentions, but no profits are guaranteed. Please always gamble responsibly, only with money that you can afford to lose. Best of luck.