AS Nancy Lorraine meet the visiting SC Bastia at Stade Marcel-Picot in the Ligue 2 match on Saturday.

All AS Nancy Lorraine v SC Bastia game predictions, stats and user poll are shown below - plus the latest match odds.

AS Nancy Lorraine go into this game coming off the back of a 1-1 Coupe De France tied result vs Rennes.

It has been a rare occasion in recent times where AS Nancy Lorraine haven’t conceded. The facts show that AS Nancy Lorraine have been scored against in 6 of their previous 6 games, shipping 11 goals during that time. Even so, time will tell if the trend will be maintained in this next match or not.

Leading up to this clash, AS Nancy Lorraine:

SC Bastia will come into the game following a 3-0 Ligue 2 win with the downing of Quevilly-Rouen in their most recent game.

A sequence of steadfast displays by the SC Bastia defensive unit has resulted in their ‘goals against’ tally amounting to 4 from their past 6 outings combined. During the same time, the number of goals that they have scored themselves is 10.

Coming into this fixture, SC Bastia are without an away win for the past 2 league matches.

If we look at their past head to head duels going back to 15/01/2000, there has been little between the sides with AS Nancy Lorraine winning 2 of those games, SC Bastia 2 and 2 being draws after 90 minutes of play.

An aggregate of 13 goals were produced between them during those clashes, with 6 of them for Les Chardons and 7 created by Bastia. That is an average goals per game value of 2.17.

The previous league fixture featuring these sides was Ligue 2 match day 3 on 11/08/2021 when it finished SC Bastia 1-1 AS Nancy Lorraine.

Looking at personnel, there is just a single fitness concern for the AS Nancy Lorraine manager Benoît Pedretti to be concerned about thanks to an otherwise robust group. Hugo Constant (Shoulder Injury) won’t play.

We believe that SC Bastia and AS Nancy Lorraine are both capable of scoring here.

A close call, and we think a draw is quite likely. We’re therefore seeing a very close game with a 1-1 score at the end of the 90. 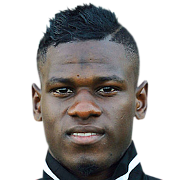 Typically deployed in the Left Wing position, Mamadou Thiam was born in Aubervilliers, France. Having played his first senior match for Dijon in the 2014 - 2015 season, the talented Forward has managed 4 league goals in this Ligue 2 2021 - 2022 season so far in 18 appearances.

We have made these AS Nancy Lorraine v SC Bastia predictions for this match preview with the best intentions, but no profits are guaranteed. Please always gamble responsibly, only with money that you can afford to lose.