This Toulouse v AS Nancy Lorraine live stream video is ready to be broadcast on 18/01/2022. Supporters of the teams can watch the clash on a live streaming service should the game be included in the schedule provided above. Here we give useful information for watching this Ligue 2 game including the most recent guide to form, h2h meetings and our game views.

In order to watch this game using other methods, look up broadcasters’ schedules in your country. Such broadcasting deals are often distributed on a per-competition/league or even single game level. For matches shown live on regional television programmes, check the schedules on the likes of BT Sport, Amazon Prime Video, Sky Sports, Now TV, iTV, Canal+, Fox Soccer, ESPN depending on your current location.

Where the abovementioned broadcaster is providing Toulouse v AS Nancy Lorraine football live streaming service, you can see the game on your mobile (iPhone, Android including Sony Xperia) and desktop as well as tablet (eg iPad, Acer ACTAB).

After the match finishes, we might also link to match highlights from time to time. We are not responsible for transmitting any match video content linked to from this site. All legal issues must be directed to the hosters/owners of said content.

Toulouse play host to visitors AS Nancy Lorraine at Stadium de Toulouse in the Ligue 2 clash on Wednesday.

All Toulouse v AS Nancy Lorraine game predictions, stats and user poll are shown below - as well as up-to-date odds.

Toulouse enter this match coming off the back of a 1-1 Ligue 2 draw vs Pau FC.

The only name on the scoresheet from Toulouse was Branco van den Boomen (78'). Jovan Nišić (54') scored for Pau FC.

Toulouse have been conceding pretty frequently lately, although they have also found ways to hit the back of the net themselves. Analysis of their previous 6 games shows that Toulouse have conceded in 5 of them as well as managing to get on the scoresheet in 6 of those matches.

Leading up to this clash, Toulouse:

AS Nancy Lorraine head into the meeting following on from a 2-1 Ligue 2 win to beat SC Bastia in their most recent match.

The numbers tell their own story, and AS Nancy Lorraine have been scored against in 6 of their last 6 games, seeing their opponents hit 10 goals in all. In defence, AS Nancy Lorraine have some weaknesses to address. Nevertheless, we’ll just have to find out whether such a trend will persist in this next match.

Heading into this fixture, AS Nancy Lorraine haven’t won away from home in the past 2 matches in the league.

Delving into their past head to head results going back to 19/01/2013 tells us that these encounters have not been happy ones for AS Nancy Lorraine. They’ve not been able to come away with any wins at all while Toulouse have been the better of the two, winning in 67% of those games played.

A total of 18 goals were shared by the two clubs throughout the course of those matches, with 14 of them for Toulouse and 4 created by Les Chardons. This gives an average number of goals per game equal to 3.

The last league fixture between these clubs was Ligue 2 match day 2 on 31/07/2021 when it finished AS Nancy Lorraine 0-4 Toulouse.

The Toulouse manager Philippe Montanier does not have any fitness worries whatsoever ahead of this match with a fully injury-free group to pick from.

Owing to an otherwise full-strength group, there is just the sole fitness worry for the AS Nancy Lorraine manager Benoît Pedretti to contend with. Hugo Constant (Shoulder Injury) misses out for this game.

It looks to us that Toulouse can get a couple of goals in this one when they face AS Nancy Lorraine, who will be up against it to score themselves.

We’re predicting a controlled 2-0 winning margin for Toulouse by the time that the referee blows the final whistle. 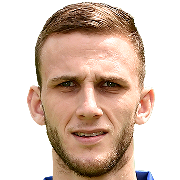 Generally used in the Centre Midfield position, Branco van den Boomen was born in Netherlands. Having made a first senior appearance for Jong Ajax in the 2013 - 2014 season, the accomplished Midfielder has contributed 5 league goals in this Ligue 2 2021 - 2022 campaign so far coming from a total of 19 appearances.

We have made these Toulouse v AS Nancy Lorraine predictions for this match preview with the best intentions, but no profits are guaranteed. Please always gamble responsibly, only with money that you can afford to lose. Good luck if you do place a bet today.

⚽️ Where can I find the odds for other Ligue 2 matches?