Return to this page a few days before the scheduled game when this expired prediction will be updated with our full preview and tips for the next match between these teams.
Full-Time Result Prediction
👉
Ascoli to Win

Full predictions, pre-match stats and user poll for Ascoli v Palermo are shown on this page - plus the latest betting odds.

Ascoli prepare for this match following on from a 1-1 Serie B drawn game vs SPAL.

Ascoli have really struggled up front of late. Their ‘goals for’ figure stands at just 4 vs opposing sides over their previous six outings. In those meetings, Ascoli have also seen the tally of goals scored against them come to 6. Such a trend isn’t assured to be carried forward here, of course.

Coming into this fixture, Ascoli have not won at home in their last 4 league matches. Fans are getting restless.

Palermo go into this clash after a 1-0 Serie B win against AS Bari in their most recent fixture.

Throughout their 6 latest matches, Eugenio Corini's Palermo have fired home a total of 8 times, earning them a goals per game average of 1.33.

Leading up to this clash, Palermo:

Checking on their most recent head-to-head clashes stretching back to 13/05/2007 shows that Ascoli have won 2 of them & Palermo 3, with the tally of drawn results being 1.

An aggregate of 21 goals were yielded between them in these games, with 8 of them for Bianconeri and 13 created by Rosaneri. The average goals per game has been 3.5.

On that occasion, Palermo managed 54% possession and 11 shots at goal with 7 on target. Goals were scored by Matteo Brunori (36') and Jacopo Segre (63').

The referee was Daniele Minelli.

There aren’t many selection issues, with just one fitness concern for the Ascoli manager Cristian Bucchi to be concerned with from an otherwise complete group. Eddy Gnahoré (Unknown Injury) misses out. Samuel Giovane will not be able to play in this game through being suspended.

In this match, Palermo are certainly able to score against this Ascoli lineup, although it possibly won’t quite be as many as they will have scored against them. 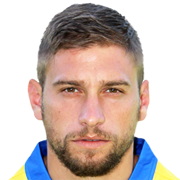 Customarily played in the Striker position, Federico Dionisi was born in Rieti, Italy. Having made his senior debut playing for Livorno in the 2009 - 2010 season, the goalscoring Forward has bagged 4 league goals in this Serie B 2022 - 2023 season so far in 19 appearances.

We have made these Ascoli v Palermo predictions for this match preview with the best intentions, but no profits are guaranteed. Please always gamble responsibly, only with money that you can afford to lose. We wish you the best of luck.