Atalanta will be at Stadio Artemio Franchi on Sunday for the Serie A clash with home team Fiorentina.

All Fiorentina v Atalanta game predictions, stats and user poll are shown below including the latest game odds.

Fiorentina prepare for this fixture after a 1-1 Serie A draw vs Genoa.

La Viola have been conceding pretty frequently of late, but they’ve also managed to hit the back of the net themselves. Over their last 6 matches, La Viola have seen their goal breached in 6 of them in addition to scoring in 5 of those matches. That sort of pattern might not follow through into this next game, of course.

Looking at their past form shows that Fiorentina:

Atalanta go into this game after a 3-2 Serie A win with the defeat of Udinese in their previous match.

Looking at their form, and Atalanta have been scored against in 5 of their last 6 games, seeing their opponents hit 8 goals in all. At the back, La Dea can certainly do much better.

Looking over their past head-to-head clashes dating back to 03/03/2019 tells us that Fiorentina have won 1 of them and Atalanta 4, with the tally of drawn results standing at 1.

A combined total of 20 goals were yielded between them during those clashes, with 7 for La Viola and 13 netted by La Dea. That is an average goals per game value of 3.33.

The previous league clash featuring these clubs was Serie A match day 11 on 13/12/2020 when it finished Atalanta 3-0 Fiorentina.

At the other end, Fiorentina got 4 attempts at goal with 2 on target.

We’ve got the feeling that Fiorentina have the ability to find the back of the net against this Atalanta side, although one goal might not be as many as they will have scored against them.

We’re therefore expecting a tight encounter finishing with a 1-2 advantage for Atalanta when all is said and done. Let’s see what happens here. 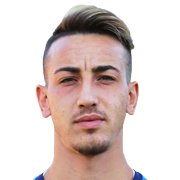 Generally played in the Centre Midfield position, Gaetano Castrovilli was born in Canosa di Puglia, Italy. After making a first senior appearance for AS Bari in the 2014 - 2015 season, the skilful Midfielder has struck 5 league goals in the Serie A 2020 - 2021 campaign so far in 25 appearances.

We have made these Fiorentina v Atalanta predictions for this match preview with the best intentions, but no profits are guaranteed. Please always gamble responsibly, only with money that you can afford to lose. Good luck if you do place a bet today.