Fluminense are in action on Thursday as they get ready for their upcoming Copa do Brasil game versus Atlético Goianiense.

Our tips, poll and stats for Atlético Goianiense v Fluminense can all be found here (including the best match odds).

Atlético Goianiense will be looking for an improved result here after a 3-4 Série A defeat last time out to Atlético Mineiro.

It’s been a rare occasion in recent times that Atlético Goianiense have kept a clean sheet. The reality is that Dragão have failed to prevent opponents from scoring in 5 of their previous 6 clashes, letting in 8 goals along the way.

Following on from a losing effort in their last game against Sport Recife in Série A action, Fluminense and their travelling fans will hope for a better result here.

Looking at their form, and Fluminense have been scored against in 5 of their last 6 games, seeing their opponents hit 8 goals overall. At the back, Tricolor have clearly had some problems. Nonetheless, we must now wait to see whether that pattern might be maintained in this next match.

Checking on their prior head to head clashes stretching back to 24/06/2012 tells us that Atlético Goianiense have won 1 of them & Fluminense 3, with the number of drawn results standing at 2.

17 goals were scored between the two sides during those clashes, with 6 of them from Dragão and 11 coming from Tricolor. This gives an average number of goals per game equal to 2.83.

Atlético Goianiense manager Vágner Mancini has zero fitness concerns to speak of coming into this clash with a completely injury-free squad to pick from.

Due to a fully healthy squad available to choose from, Fluminense manager Odair Hellmann does not have any fitness concerns at all ahead of this clash.

In our opinion, Fluminense will need to apply a lot of pressure to find the net against this Atlético Goianiense outfit who we think will likely gain the upper hand.

We’re therefore expecting a hard-fought contest, finishing with a 1-0 advantage for Atlético Goianiense when the full-time whistle blows.

Over/Under 2.5 Goals Prediction for Atlético Goianiense vs Fluminense
Under 2.5 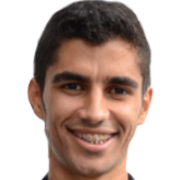 Generally taking up the Central Attacking Midfielder position, Jorginho was born in Brazil. After having made a senior debut playing for Atlético Goianiense in the 2017 season, the gifted Midfielder has hit 2 league goals in the Série A 2020 campaign so far from a total of 5 appearances.

We have made these Atlético Goianiense v Fluminense predictions for this match preview with the best intentions, but no profits are guaranteed. Please always gamble responsibly, only with money that you can afford to lose. Good luck with your selections.