Internacional make the trip to Estádio Antônio Accioly on Monday for the Serie A fixture with home side Atlético Goianiense.

Our Atlético Goianiense v Internacional tips, poll and stats can be seen in full below (including the best match odds).

Atlético Goianiense will be looking to improve on their last outing here following a 2-0 Serie A losing effort in their last game against Coritiba.

Analysis of their past results shows that Atlético Goianiense:

Internacional will come into the game after a 1-0 Serie A win in the defeat of Cuiabá in their most recent match.

A series of very capable showings from the Internacional defensive players has seen their ‘goals against’ tally amounting to 2 from their past 6 outings in total. In that period, their own forwards have managed to score 11. We will see whether or not that trend will be sustained in this game.

Their prior results show that Internacional:

Inspecting their most recent head-to-head meetings dating back to 28/10/2020 shows us that Atlético Goianiense have won 1 of them & Internacional 2, with the tally of drawn matches being 3.

A combined total of 11 goals were yielded between them during those clashes, with 5 of them for Dragão and 6 being from Colorado. This gives an average number of goals per game equal to 1.83.

The previous league match featuring the two was Serie A match day 8 on 30/05/2022 when it finished Internacional 1-1 Atlético Goianiense.

In that match, Internacional managed 44% possession and 10 shots on goal with 5 on target. Their only player on the scoresheet was Wanderson (12').

At the other end, Atlético Goianiense got 20 attempts on goal with 7 on target. Diego Churín (79') was the scorer.

The Atlético Goianiense boss Eduardo Baptista does not have any fitness worries whatsoever coming into this clash owing to a completely healthy group available for selection.

In all likelihood, Dragão should use a 4-2-3-1 formation for this one, utilising Dos Santos Renan, Hayner, Wanderson, Klaus, Jefferson, Willian Maranhão, Edson Fernando, Airton, Shaylon, Wellington Rato and Ricardinho.

With a fully injury-free group available to choose from, the Internacional manager Mano Menezes has zero fitness concerns to speak of ahead of this clash.

Our thinking is that Atlético Goianiense might need a bit of good fortune to breach the defence of this Internacional lineup who we think might end up scoring and possibly keep a clean sheet as well.

That’s why our selection here is for a hard-fought 0-1 winning score for Internacional at the end of the 90. 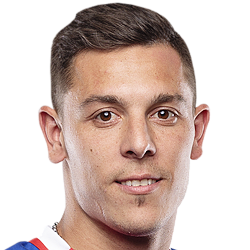 Generally taking up the Striker position, Diego Churín was born in Arroyo Dulce, Argentina. After making a first senior appearance for Independiente in the 2007 - 2008 season, the skilful Forward has hit 5 league goals in the Série A 2022 campaign to date in 25 appearances.

We have made these Atlético Goianiense v Internacional predictions for this match preview with the best intentions, but no profits are guaranteed. Please always gamble responsibly, only with money that you can afford to lose.