Our predictions, user poll and statistics for Atlético San Luis v Necaxa can be found here including the latest game odds.

Atlético San Luis will play in this game coming off the back of a 1-1 Liga MX (Apertura) drawn result against FC Juárez.

Their more recent scorelines highlight the fact that quality has been evident in the Atlético San Luis backline. Atlético San Luis have been stingy, seeing the tally of goals that have gone past their goalkeeper during their previous 6 outings standing at 3. Even so, we’ll just have to find out if that pattern might be maintained here in this game.

Going into this game, the form guide shows that Atlético San Luis:

Following on from tasting defeat last time out to Cruz Azul in Liga MX (Apertura) competition, Necaxa will be hoping to turn things around here.

Jaime Lozano's Necaxa have converted 6 times throughout their most recent sextet of matches. The number of goals that they have conceded during the equivalent period equals 6.

Checking on their prior head-to-head clashes dating back to 09/11/2019 tells us that Atlético San Luis have won 1 of these games & Necaxa 4, with the tally of drawn results being 1.

An aggregate of 16 goals were shared by the two clubs during those clashes, with 5 of them from Rojiblancos and 11 belonging to Lightning Bolts. This gives an average number of goals per game equal to 2.67.

For their opponents, Atlético San Luis had 15 shots at goal with 7 of them on target. Germán Berterame (34', 81') scored.

The Atlético San Luis boss André Jardine has no fitness worries whatsoever coming into this clash thanks to a completely injury-free group ready to go.

Due to a completely healthy group available to choose from, the Necaxa manager Jaime Lozano does not have any fitness concerns at all ahead of this match.

We’re thinking that Necaxa and Atlético San Luis should play out a closely-fought contest here.

A draw is a real possibility, as we are expecting there to be little between them. With that in mind, we reckon that it will be a tight encounter, finishing with a 1-1 score at the conclusion of the game. 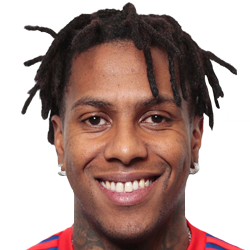 Typically taking to the field in the Striker position, Abel Hernández was born in Canelones, Uruguay. After having made a senior debut playing for Central Español in the 2006 - 2007 season, the accomplished Forward has netted 2 league goals in this Liga MX (Clausura) 2021 - 2022 season so far coming from a total of 16 appearances.

We have made these Atlético San Luis v Necaxa predictions for this match preview with the best intentions, but no profits are guaranteed. Please always gamble responsibly, only with money that you can afford to lose.