Return to this page a few days before the scheduled game when this expired prediction will be updated with our full preview and tips for the next match between these teams.
Full-Time Result Prediction
👉
PAS Giannina to Win

The Super League match at Zosimades Stadium on Saturday will see home side PAS Giannina go into battle with opponents Atromitos.

Scroll down for all of our predictions, poll and stats for the PAS Giannina v Atromitos game (plus the best game odds).

PAS Giannina prepare for this game following on from a 1-1 Super League drawn result vs Panetolikos.

PAS Giannina have not been the best at stopping their opponents recently, but they’ve also managed to hit the back of the net themselves. Looking at their last 6 games, PAS Giannina have seen their goal breached in 6 of them in addition to scoring in 5 of those games. That kind of trend won’t necessarily follow through here, though.

Heading into this contest, PAS Giannina have not registered a win against Atromitos in their last 3 league matches.

Previously, Atromitos drew 1-1 in the Super League match with Olympiacos.

In that match, Atromitos managed 32% possession and 13 attempts on goal with 2 on target. The only player to score for Atromitos was Samúel Friðjónsson (64'). Olympiacos had 17 attempts at goal with 6 on target. Cédric Bakambu (54') scored for Olympiacos.

For 6 of the prior six games featuring Atromitos, a relatively low number of goals have gone in between them and opposing sides. The overall average number of goals per game in that period works out to a meagre 1.83, with the average goals for Atromitos standing at 1.

Looking at the statistics for their head to head duels dating back to 31/10/2020, it’s been all-even between these two clubs with PAS Giannina winning 2 of those games, Atromitos 2 and 2 being draws after 90 minutes of play.

11 goals were scored between the two sides during those clashes, with 6 for Ajax of Epirus and 5 created by Atromitos. That is an average goals per game value of 1.83.

The last league encounter between these sides was Super League match day 7 on 10/10/2022 when it ended Atromitos 2-1 PAS Giannina.

In that game, Atromitos managed 63% possession and 13 shots at goal with 4 of them on target. The goalscorers were Theofanis Mavromatis (63' Own goal) and Viðar Örn Kjartansson (75', 86').

PAS Giannina got 7 attempts on goal with 2 on target.

The referee was Angelos Angelakis.

From a largely available group of players, there’s just a single fitness worry for the Atromitos boss Chris Coleman to be concerned with. Kyriakos Kivrakidis (Cruciate Ligament Rupture) won’t be in action. Laurens De Bock cannot play in this game through suspension.

Here is a game where Atromitos will need to put in a solid display to put one past this PAS Giannina outfit who we think will likely end up scoring and staying ahead.

We therefore think that it’s going to be a narrow 1-0 winning score for PAS Giannina at the end of the 90. 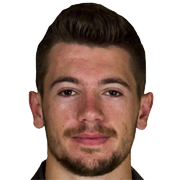 Generally taking up the Striker position, Giorgos Pamlidis was born in Greece. Having played his first senior match for Ergotelis in the 2014 - 2015 season, the skilful Forward has scored a sum of 2 league goals in the Super League 2022 - 2023 season so far in 18 appearances.

We have made these PAS Giannina v Atromitos predictions for this match preview with the best intentions, but no profits are guaranteed. Please always gamble responsibly, only with money that you can afford to lose. We wish you the best of luck.