Barcelona will be facing away team Getafe at Spotify Camp Nou in the La Liga game on Sunday.

To see all of our predictions, user poll & stats for Barcelona v Getafe, scroll down - as well as up-to-date odds.

Barcelona, following on from their previous result, will be hoping for more of the same after the 0-5 Copa del Rey victory vs Ceuta.

Fixtures with Barcelona have proved to be lively encounters recently with plenty of scoring anticipated. Over their past 6 clashes alone, a total of 23 goals have been recorded for both teams combined (at an average of 3.83 goals per game) with 16 of them belonging to Barcelona. Previous results aside, it remains to be seen if such a trend shall be maintained in this next match.

Looking at the pre-match facts, Barcelona:

Since a losing effort in their last game against Espanyol in La Liga competition, Getafe and their travelling supporters will be hoping that they can get a better result in this one.

In their previous half-dozen clashes, Getafe have bagged a total of 11 goals. Getafe have also scored on each one of those occasions. Over that period, their defenders have seen 9 goals go against them.

Coming into this meeting, Getafe are without an away win for the past 2 matches in the league.

Inspecting their most recent head to head clashes stretching back to 28/09/2019 tells us that Barcelona have won 4 of them & Getafe 1, with the number of drawn matches standing at 1.

A combined total of 16 goals were scored between them throughout the course of those matches, with 11 of them from Barça and 5 for Azulones. This gives an average number of goals per game equal to 2.67.

The last league match between these clubs was La Liga match day 37 on 15/05/2022 when the final score was Getafe 0-0 Barcelona.

That time, Getafe managed 29% possession and 9 shots on goal with 3 on target.

For their opponents, Barcelona had 5 attempts at goal with 1 on target.

Nearly everyone is up for selection, with just the lone fitness concern for the Barcelona gaffer Xavi Hernández to contend with from of an almost fully healthy squad. Keidi Bare (Ruptured ankle ligament) will miss out. Suspended players who are serving a ban for this game are Robert Lewandowski and Ferran Torres.

In an otherwise healthy group, there’s only the sole fitness problem for the Getafe gaffer Quique Sánchez Flores to contend with. Mauro Arambarri (Ankle Injury) won’t be in action.

We’re inclined to think that Getafe must be fancied to score against this Barcelona lineup, however it probably won’t quite be as many as they’ll concede.

Our selection here is for a 2-1 advantage for Barcelona by the time that the referee blows the final whistle. Could easily see this go either way. 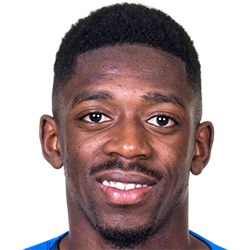 Typically used in the Right Wing position, Ousmane Dembélé was born in Vernon, France. After making a first senior appearance for Rennes in the 2015 - 2016 season, the talented Forward has accumulated 5 league goals in the LaLiga 2022 - 2023 campaign to date in 16 appearances.

While we have made these predictions for Barcelona v Getafe for this match preview with the best of intentions, no profits are guaranteed. Always gamble responsibly, and with what you can afford to lose. Good luck if you do place a bet today.