The League Two clash at SO Legal Stadium on Saturday sees home side Barrow do battle with opponents Northampton Town.

Our Barrow v Northampton Town tips, poll and stats can be seen in full below (including the best match odds).

Barrow prepare for this fixture after a 0-0 League Two drawn game vs Leyton Orient.

Over their preceding six fixtures, Pete Wild's Barrow have hit the back of the net 5 times - an average number of goals scored per match of 0.83.

After being beaten in their last game against Stockport County in League Two action, Northampton Town and their fans will hope to get a better result this time.

The only scorer from Northampton Town was Jack Sowerby (68' Own goal). Antoni Sarcevic (33') scored for Stockport County.

Looking at their form, and Northampton Town have been scored against in 5 of their last 6 games, with opponents netting 8 goals in total. In defence, Northampton Town can certainly do much better. That trend isn’t assured to follow through into this match, however.

The last league meeting between these clubs was League Two match day 7 on 03/09/2022 when it ended Northampton Town 3-1 Barrow.

The Barrow boss Pete Wild has no fitness worries at all before this clash thanks to a completely injury-free group to choose from.

Thanks to a fully healthy squad to pick from, the Northampton Town manager Jon Brady does not have any fitness worries whatsoever before this clash.

We’re of the opinion that Northampton Town and Barrow are both capable of scoring here.

Shouldn’t be much in it, and a draw looks quite a realistic result. We’re therefore expecting a tight encounter, finishing with a 1-1 draw when the full-time whistle blows. 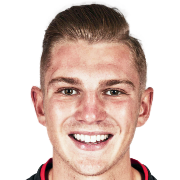 Mostly played in the Left Wing position, Ben Whitfield was born in Bingley, England. Having made a first senior appearance for Kidderminster Harriers in the 2015 - 2016 season, the accomplished Forward has hit 4 league goals in the League Two 2022 - 2023 season to date in 26 appearances.

While we have made these predictions for Barrow v Northampton Town for this match preview with the best of intentions, no profits are guaranteed. Always gamble responsibly, and with what you can afford to lose.