Return to this page a few days before the scheduled game when this expired prediction will be updated with our full preview and tips for the next match between these teams.
Full-Time Result Prediction for Entella vs Benevento
Benevento to Win
Entella will be hosting visiting side Benevento at Stadio Comunale di Chiavari in this Serie B game on Saturday.

Here, we’re thinking that Entella might have a difficult job to score goals against this Benevento team who we reckon should end up scoring and staying ahead. That’s why we have predicted a highly competitive game with a 0-1 victory for Benevento at the end of this one. Let’s see how it plays out. View all of the Entella v Benevento predictions, poll and stats below - plus the latest match odds.

Analysis of their past results shows that Entella: 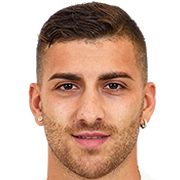 Regularly playing in the Striker position, Giuseppe De Luca was born in San Nicola, Italy. Having made his senior debut playing for Varese in the 2010 - 2011 season, the skilful Forward has netted 9 league goals in the Serie B 2019 - 2020 season to date coming from a total of 21 appearances.

We have made these Entella v Benevento predictions for this match preview with the best intentions, but no profits are guaranteed. Please always gamble responsibly, only with money that you can afford to lose. Best of luck.