Our full set of predictions, statistics and match poll for Middlesbrough v Birmingham City can be seen below - along with the latest match odds.

Middlesbrough won’t want a repeat of their last result here after the 2-1 FA Cup defeat in their last game at the hands of Brentford.

Middlesbrough haven’t had any problems with scoring, finding the back of the net in one hundred percent of their last 6 games.

They’ve hit an aggregate of 13 during that period and have conceded a total of 6.

Going into this encounter, Middlesbrough haven't been beaten in the league by Birmingham City in their last 2 matches.

After tasting defeat last time out to Manchester City in FA Cup action, Birmingham City and their fans will hope to get a better result this time.

The attacking players from Birmingham City have had real problems scoring goals over their previous 6 games, contributing the unsatisfactory return of only 3. In those fixtures, The Blues have also seen the overall goal tally against them equal 16. That sort of trend might not be carried forward into this next game, of course.

Looking at their past form shows that Birmingham City:

A glance at their past head to head clashes going back to 06/03/2018 shows us that Middlesbrough have won 4 of these games & Birmingham City 1, with the number of drawn results standing at 1.

A combined sum of 15 goals were produced between them during those clashes, with 10 of them from The Boro and 5 coming from The Blues. This gives an average number of goals per game equal to 2.5.

The last league meeting featuring these clubs was Championship match day 20 on 19/12/2020 when it finished Birmingham City 1-4 Middlesbrough.

In that game, Birmingham City managed 53% possession and 9 attempts on goal with 2 of them on target. The scorers were Maxime Colin (15') and Neil Etheridge (56' Own goal).

It doesn’t get much better regarding selection, with just the lone fitness concern for the Middlesbrough manager Neil Warnock to be concerned about from an otherwise complete set of players. Ashley Fletcher (Hamstring Injury) will miss out.

Due to a completely healthy group to pick from, Birmingham City boss Aitor Karanka has zero fitness worries to report before this game.

Our assessment is that Middlesbrough look set to score a couple of goals against Birmingham City, who will not find it easy to find the back of the net.

We’re tipping a fairly comfortable 2-0 winning margin for Middlesbrough by the time that the referee blows the final whistle. 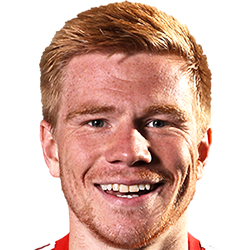 Mostly deployed in the Right Wing position, Duncan Watmore was born in Cheadle Hulme, England. Having made his senior debut playing for Altrincham in the 2012 - 2013 season, the dangerous Forward has contributed 5 league goals in this Championship 2020 - 2021 campaign so far in 8 appearances.

We have made these Middlesbrough v Birmingham City predictions for this match preview with the best intentions, but no profits are guaranteed. Please always gamble responsibly, only with money that you can afford to lose. Good luck!