Boca Juniors enter this match coming off the back of a 0-0 Copa de la Liga Profesional draw against Defensa y Justicia.

Their most recent results show that huge efforts have been put in by the Boca Juniors rearguard. Boca Juniors have been stingy, seeing the tally of goals that have gone in at their end over the course of their previous six matches standing at 4. That being said, it remains to be seen whether that trend might persist here in this game.

Defensa y Justicia come into this encounter after a 1-0 Copa de la Liga Profesional win against Patronato in their most recent game.

Checking on their most recent head-to-head clashes going back to 01/04/2017 tells us that Boca Juniors have won 4 of these games & Defensa y Justicia 1, with the tally of drawn results standing at 1.

A total of 9 goals were shared by the two clubs throughout the course of those matches, with 6 from Los Xeneizes and 3 created by Halcón. The average goals per game has been 1.5.

The previous league clash between these clubs was Superliga match day 11 on 15/09/2021 which ended up with the score at Boca Juniors 0-0 Defensa y Justicia.

In that game, Boca Juniors had 59% possession and 14 shots on goal with 3 on target.

At the other end, Defensa y Justicia had 11 shots at goal with 3 on target.

Owing to a completely injury-free squad ready to go, the Defensa y Justicia boss Sebastián Beccacece has no fitness concerns to report coming into this clash.

It looks to us that Boca Juniors look likely to score more than once when they come up against Defensa y Justicia, who will not find it easy to score themselves.

We therefore think that it’s going to be a 2-0 victory for Boca Juniors when the full-time whistle blows. 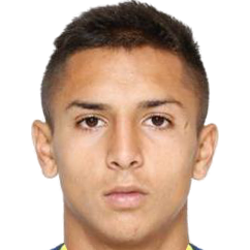 Regularly playing in the Centre Midfield position, Agustín Almendra was born in Argentina. After making a first senior appearance for Boca Juniors in the 2017 - 2018 season, the dangerous Midfielder has scored a sum of 3 league goals in this Superliga 2021 season to date coming from a total of 15 appearances.

While we have made these predictions for Boca Juniors v Defensa y Justicia for this match preview with the best of intentions, no profits are guaranteed. Always gamble responsibly, and with what you can afford to lose. Good luck if you do place a bet today.