The Championship game at Deepdale on Saturday sees home side Preston North End take to the field against Brentford.

All Preston North End v Brentford game predictions, stats and user poll are shown below - along with the latest match odds.

Preston North End, who won their previous game, will hope for a similar result following a 0-1 Championship success against Swansea City.

Preston North End have struggled with their forward play in recent times. Their ‘goals for’ figure equals just 3 versus opponents over their previous six fixtures. In those meetings, The Lilywhites have also seen the number of goals that have gone against them total 6.

Coming into this fixture, Preston North End haven’t won at home in the past 3 league games.

In their last fixture, Brentford drew 0-0 in the Championship match with Birmingham City.

In that match, Brentford had 62% possession and 9 attempts at goal with 4 on target. For their opponents, Birmingham City had 6 shots on goal with 0 of them on target.

For 5 of the past 6 clashes involving Brentford, a comparatively low number of goals have gone in between them and their opponents. The overall average goals scored per game during that period is a paltry 1.67, with the number of goals averaged by The Bees standing at 0.83. That aside, we must now wait to see whether that trend shall be replicated here in this match.

Looking at the pre-match facts, Brentford:

Inspecting their most recent head-to-head meetings going back to 10/02/2018 tells us that Preston North End have won 3 of these and Brentford 2, with the tally of drawn games being 1.

21 goals were yielded between them throughout the course of those matches, with 11 of them from The Lilywhites and 10 belonging to The Bees. That’s an average goals per game figure of 3.5.

The previous league meeting featuring these clubs was Championship match day 4 on 04/10/2020 and the score finished Brentford 2-4 Preston North End.

In that match, Brentford managed 43% possession and 13 shots on goal with 4 on target. Their only player on the scoresheet was Ivan Toney (8', 43').

There aren’t many personnel worries, with just the sole fitness concern for the Preston North End boss Frankie McAvoy to be concerned with from an otherwise fully-primed set of players. Patrick Bauer (Achilles tendon rupture) is sidelined.

Due to a fully injury-free group to pick from, Brentford boss Thomas Frank does not have any fitness concerns whatsoever coming into this clash.

We feel that Preston North End will need things to go their way to see themselves scoring against this Brentford outfit who we think will likely win and very possibly keep a clean sheet.

With that in mind, we reckon that it will be a narrow 0-1 winning margin for Brentford at the end of this game. 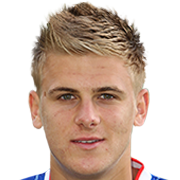 Mostly taking to the field in the Centre Midfield position, Brad Potts was born in Hexham, England. After having played his first senior match for Carlisle United in the 2012 - 2013 season, the gifted Midfielder has contributed 5 league goals in this Championship 2020 - 2021 campaign to date in a total of 36 appearances.

While we have made these predictions for Preston North End v Brentford for this match preview with the best of intentions, no profits are guaranteed. Always gamble responsibly, and with what you can afford to lose.