Vicenza will take to the pitch with visiting side Brescia at Stadio Romeo Menti in the Serie B game on Saturday.

All Vicenza v Brescia game predictions, stats and user poll are shown below - plus the latest betting odds.

Vicenza will be looking to improve on their last outing here following a 2-1 Serie B defeat last time out to Ascoli.

It’s been a rare occasion in recent times where Vicenza have shown defensive steel. In fact, Vicenza have been scored against in 6 of their previous 6 clashes, leaking 12 goals on the way.

Coming into this clash, Vicenza have not won at home in their last 5 league matches. Their supporters are understandably frustrated.

Brescia will go into this clash following a 1-0 Serie B win as they beat Pordenone in their last game.

In 5 of the previous six clashes featuring Brescia, a comparatively low number of goals have gone in between them and their opposition. The overall average goals scored per game during that spell works out to just 2, with the average goals for Rondinelle being 1. While that may be of interest, we’ll just have to find out whether that trend shall be replicated in this next match or not.

Ahead of this meeting, Brescia are undefeated by Vicenza in games played away from home for the previous 3 league matches.

An examination of their most recent head to head clashes stretching back to 12/12/2015 tells us that Vicenza have won 2 of these & Brescia 3, with the number of drawn results standing at 1.

A total of 15 goals were yielded between them in this period, with 7 for Biancorossi and 8 belonging to Rondinelle. That’s an average goals per game of 2.5.

The previous league clash featuring these sides was Serie B match day 36 on 04/05/2021 which ended up with the score at Vicenza 0-3 Brescia.

That time, Vicenza had 39% possession and 10 attempts on goal with 6 of them on target.

The match was refereed by Daniele Paterna.

The Vicenza manager Cristian Brocchi will be grateful not to have any fitness concerns to speak of before this clash thanks to a completely healthy group available to choose from.

Due to a fully injury-free squad to pick from, the Brescia manager Filippo Inzaghi has no fitness worries to report coming into this game.

Our assessment here is that Vicenza may find it difficult to break down this Brescia lineup who we think might do enough to score at the other end and edge ahead.

We’re therefore expecting a very even match with a 0-1 winning margin for Brescia at the end of the match. 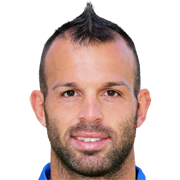 Typically playing in the Striker position, Riccardo Meggiorini was born in Isola della Scala, Italy. After having played his first senior match for Inter Milan in the 2004 - 2005 season, the dangerous Forward has got 2 league goals in the Serie B 2021 - 2022 season so far in 10 appearances.

We have made these Vicenza v Brescia predictions for this match preview with the best intentions, but no profits are guaranteed. Please always gamble responsibly, only with money that you can afford to lose.