The Ligue 2 fixture at Stade Gaston Petit on Friday sees hosts Châteauroux up against opponents in EA Guingamp.

All Châteauroux v EA Guingamp game predictions, stats and user poll are shown below - as well as up-to-date odds.

Châteauroux won’t want a repeat of their last result here after the 2-0 Ligue 2 loss in their previous game against ESTAC.

The only scorer from Châteauroux was Ibrahim Cissé (77' Own goal). Lenny Pintor (84') scored for ESTAC.

Coming into this fixture, Châteauroux haven’t won at home in the past 3 matches in the league.

In their last fixture, EA Guingamp drew 2-2 in the Ligue 2 tie with Amiens SC.

The only name on the scoresheet from EA Guingamp was Frantzdy Pierrot (37'). Alexis Blin (6' Own goal), Arnaud Lusamba (16') and Mickael Alphonse (86') scored for Amiens SC.

Demonstrating their partiality to productive matches, goals have been scored 21 times in the last six matches in which EA Guingamp have taken to the pitch, making it a mean average of 3.5 goals per fixture. Opposing teams have got 13 of these goals.

Coming into this clash, EA Guingamp are without a win away from home in their last 7 league matches.

A review of their past head to head clashes going back to 29/07/2011 tells us that Châteauroux have won 1 of these and EA Guingamp 4, with the tally of drawn games standing at 1.

A combined total of 19 goals were scored between the two sides in these games, with 6 of them for Châteauroux and 13 netted by Guingamp. That is an average goals per game value of 3.17.

The last league fixture featuring the two was Ligue 2 match day 19 on 20/12/2019 which ended up with the score at Châteauroux 1-5 EA Guingamp.

Looking at personnel, there is just one fitness concern for the Châteauroux manager Benoît Cauet to be concerned with thanks to an otherwise robust squad. Chaker Alhadhur (Cruciate Ligament Rupture) is out of contention.

Out of a mainly available group, there’s only the one fitness worry for the EA Guingamp gaffer Mehmed Baždarević to be concerned about. Félix Eboa Eboa (Cruciate Ligament Rupture) won’t be in action.

In our view, Châteauroux might need a bit of good fortune to find the net against this EA Guingamp outfit who we think might score one, at least.

That’s why our selection here is for a good tussle with a 0-1 victory for EA Guingamp at the end of this one. 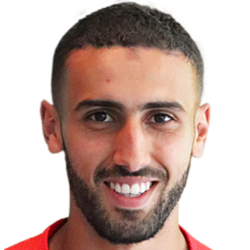 Customarily deployed in the Centre Midfield position, Amir Nouri was born in Rillieux-La-Pape, France. After making a first senior appearance for Béziers in the 2018 - 2019 season, the goalscoring Midfielder has contributed 2 league goals in the Ligue 2 2020 - 2021 season to date from a total of 16 appearances.

We have made these Châteauroux v EA Guingamp predictions for this match preview with the best intentions, but no profits are guaranteed. Please always gamble responsibly, only with money that you can afford to lose. We wish you the best of luck.