The Eerste Divisie game at Stadion De Vijverberg on Friday will see hosts De Graafschap take to the field against opponents FC Volendam.

De Graafschap will be looking for a repeat result of a 0-2 Eerste Divisie victory versus FC Emmen.

Reinier Robbemond's De Graafschap have found the net a sum total of 9 times in their preceding six outings. The corresponding number of goals that have been scored against them in those fixtures stands at 7.

FC Volendam come into this match after a 5-0 Eerste Divisie win versus MVV in their last game.

Proving their appetite for eventful matches, goals have been seen as many as 23 times in the prior 6 matches in which FC Volendam have sent out their troops, making it a mean average of 3.83 goals each fixture. Their opponents have hit 11 of these goals. Regardless, it remains to be seen whether such a trend might be replicated in this next match or not.

A look at their previous results shows us that FC Volendam:

A glance at their prior head-to-head clashes going back to 22/09/2017 shows that De Graafschap have won 3 of these and FC Volendam 1, with the number of drawn results being 2.

The previous league clash between these clubs was Eerste Divisie match day 21 on 24/01/2021 which finished with the scoreline of FC Volendam 1-4 De Graafschap.

Our assessment is that FC Volendam are dangerous enough to break down this De Graafschap lineup, although that probably won’t quite be enough to avoid defeat.

Our tip is for a narrow 2-1 victory for De Graafschap by the time that the referee blows the final whistle. It will be interesting to see how this one goes. 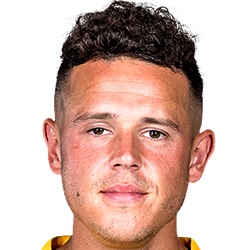 Mostly playing in the Right Wing position, Giovanni Korte was born in Netherlands. After having made a senior debut playing for ADO Den Haag in the 2012 - 2013 season, the skilful Forward has struck 2 league goals in the Eerste Divisie 2021 - 2022 campaign to date from a total of 4 appearances.

While we have made these predictions for De Graafschap v FC Volendam for this match preview with the best of intentions, no profits are guaranteed. Always gamble responsibly, and with what you can afford to lose. We wish you the best of luck.